THE Huffington Post recently published an article that was rather anomalous in its ignorance of current Philippine politics, as reflected in its partisan endorsement of Liberal Party candidate Benigno "Noynoy" Aquino, as well as in its condescending remark on the how movie stars and "nut jobs" get to hold elected positions. The particular paragraph that got my ire is this: 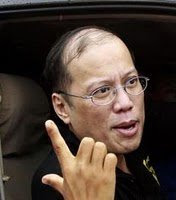 "Noynoy is the comfort candidate. In a country where crooks, charlatans, film stars, sportsmen and nut jobs routinely stand for, and get voted into office, Mr. Aquino represented a steady and secure vote."

How ignorant and insulting can Virginia M. Moncrieff get? She's all praises for Aquino, ignoring his extremely poor legislative background of having absolutely no bills passed. What does he mean by "comfort candidate" in the first place? I hope it's nothing like the Filipina "comfort women" of World War II period.

In the title, Huffington Post even had the uninformed gall to call Noynoy Aquino "President elect." (Who is this guy? Philippines President Elect - Mr Vanilla of Manila). That is rather based on futuristic, if not speculative, thinking given that the Commission on Elections has yet to proclaim Aquino as the winner of the May 10, 2010 polls. Moreover, since the author was so much in a hurry to name Aquino "President Elect," she has missed consideration of the fact that three of the tail-end candidates who admit their electoral defeat refuse to concede on grounds of what apparent poll fraud.

As a Filipina patriot who feels Moncrieff and her readers ought to be more informed, and who feels slighted by her sweeping, rather disdainful description of Philippine politics, I dutifully posted a comment. Unfortunately, while it got posted in my Facebook account, it was axed by the moderators. I feel that comment ought to see print so I'm posting it here:


Sounds like CIA-type endorsement to me. How haughty can you get looking down on Filipino film stars getting elected. Hey, your country has your share. Remember the Hawk RONALD REAGAN and now, that ARNOLD SWARZENEGGER?

Re Noynoy Aquino, who says he is "comfort candidate"? You? How would an incompetent congressman then senator with ZERO-ZERO bills passed and who was opportunistic enough to capitalize on the death of his mother be a comfort candidate?


Are you aware that his mother Cory Aquino approached the man they helped deposed backed in 2001, ex-Pres. Joseph Estrada, so Noynoy Aquino can be included in the opposition's senate slate in 2007?


And are you even aware of the psychological incompetence issue being thrown at Noynoy Aquino? An issue he skirted by REFUSING psychological testing even when practically all other presidential candidates expressed their agreement to undergo one? And are you aware that many who did not vote for Noynoy Aquino FEAR he is most unfit for the job [supposedly] because he is a bit of a psychologically challenged case?

Also, we may have corruption here in the Philippines but, at least, we DO NOT KILL our presidents, unlike some country I know? :)

_______________
Moncrieff, Virginia. Who is this guy? Philippines President Elect - Mr Vanilla of Manila.
With his penchant for badly fitting shirts, dorky hair style, and complete lack of personal charisma, Benigno "Noynoy" Aquino appears the...
http://www.huffingtonpost.com/virginia-moncrieff/who-is-this-guy-philippin_b_572804.html
Posted by Jesusa Bernardo at Monday, May 17, 2010