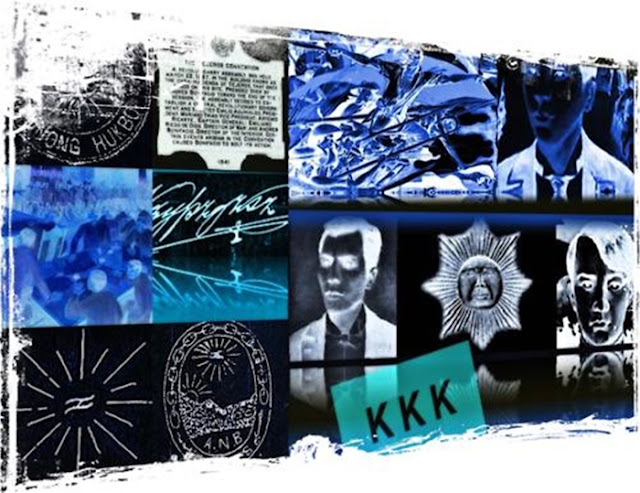 6) The treacherous 'dead or alive' attack on and abduction of the Bonifacios, to the 'kangaroo court' Council of War trial, to the surreptitious "execution" [considered by Mabini as "assassination"] of the Bonifacio brothers.

24 Aug. 1896 - Katipuneros arrive at the barn of Melchora Aquino for their hurried National Assembly, with Supremo Andres Bonifacio and members of the Supreme Council (Kataastaasang Kapulungan), heads of the supramunicipal (sangunian) and chapter (balangay) units of the Katipunan in attendance; American colonial military historian John R. M. Taylor will later come to the conclusion that the Katipunan was the first national government of the Philippines, writing that Bonifacio turned the Katipunan "lodges into battalions, his grandmasters into captains, and the supreme council of the Katipunan" into a revolutionary body fighting for independence against colonial Spain.


26 Aug. 1896 - Bonifacio unfurls the Katipunan flag in Balintawak five (5) days after the Spaniards ascertained the existence of the KKK.

29 Aug. 1896 - The Katipuneros led by its Supremo Bonifacio, start the general uprising against Spain midnight of this day, a Saturday, with its first offensive attacking an isolated colonial garrison in Luzon; Aguinaldo's group from Cavite fails to arrive as planned and the initial major salvo is unsuccessful. (Salazar)

31 October 1896 - Aguinaldo issues two manifestos: (1) defines the revolution's aims as independence and "Liberty, Equality and Fraternity," and (2) calls for the formation of a central revolutionary government.
17 December 1896 - the Supremo arrives in Cavite, in response to the invitation of the Magdiwang KKK chapter in the province for the purpose of resolving their rivalry with the rival Magdalo chapter.

Post-Christmas 1896 - Smear propaganda against the Supremo circulates, including in the form of poison letters, in rebel towns particularly in San Francisco de Malabon where Bonifacio is greatly respected and admired, with Tirona as suspect: Bonifacio is villified for supposedly not believing in God; having low education; being  mere lowly hired help in a firm dealing with tiles and with no other income; that he was an agent of the friars, with his sister being a paramour of a Spanish curate. (Alvarez)

- With some of the poison letters reaching the Supremo when a number of disbelieving recipients voluntarily  turn over the poison letters to him, Bonifacio demands an explanation from Tirona at the home of Col. Nocon: Tirona haughtily & defiantly dismisses the accusations, prompting the Supremo to nearly shoot at Tirona if not for the intercession of some women present. (Alvarez)

29 December 1896 - Magdiwang and Magdalo leaders meet to discuss how to settle differences in revolutionary struggle and also a plot to snatch Rizal on the eve of his execution scheduled by the Spanish colonial authorities:

- exploration of unified leadership fails because of dispute over which leadership should prevail; Bonifacio asks Aguinaldo, secretary of the meeting, to record a motion forwarded re the framing of a constitution [despite the fact that the KKK already had one] but Aguinaldo asks that the matter be deferred at the moment; (Alvarez)

Circa early 1897 - Magdiwang faction building up secret enemies--Katipuneros who had been rebuffed or dismissed for insubordination, including Mariano Trias who refused to give up his private army.  (Alvarez).

January 1897 - Magdiwang is major Katipunan force in Cavite, with 3,400 guns compared to Magdalo's 2000 and had decidedly bigger territories covered. (Alvarez).

February 1897 -  Supremo Andres Bonifacio, Gen. Emilio Aguinaldo, Mariano Trias and Procopio Bonifacio were poised to come to blows over defamatory idle talk but was prevented by Santiago "Apoy" Alvarez and Artemio Ricarte who manage to soothe the feelings of the four men. (Alvarez).

14 Feb. 1897 - The Spaniards begin their 52-day offensive at Cavite. Within days, the colonizers would begin to successively retake rebel towns under the Magdalo faction of the Katipunan but not so much the Magdiwang. The council and members of Magdalo would withdraw to San Francisco de Malabon and try to hold meetings in other Magdiwang territories  (Delos Santos; Alvarez)

-- Daniel Tirona scandalously objects to Bonifacio's election on supposed grounds of the latter's lack of qualifications, prodding (unsuccessfully) the crowd to elect lawyer Jose del Rosario instead. Bonifacio, as chairman of the Convention, declares the proceedings null and void on grounds of grave violations of the prior agreement to honor the electoral results.

23 March 1897 - Bonifacio, along with over 40 other Katipuneros, signs the Acta de Tejeros that nullifies the fraudulent and anomalous Tejeros Convention.

24 March 1897 - Aguinaldo takes his office as "President" in secret, with Catholic priest (under Spanish authority) Cenon Villafranca officiating, despite Bonifacio's nullification of the Tejeros polls in the latter's capacity as presiding officer and the manifestos and speeches  circulated in connection with the scandalous elections. (Alvarez)

-- Artemio Ricarte y Garcia reluctantly also takes his oath of office after being elected the General-in-Chief of the Revolutionary Army during the anomalous Tejeros Convention. He insinuates that his eventual oath-taking came under a sort of duress: "That they kill me that same night, for the reasons above cited, or that they give me three hours, or at least one hour, to think over what I must necessarily do in order to accept said office; this second request was but a mere pretext, in order to enable me to absent myself from that Assembly.  I obtained nothing of what I requested, because not even one of them gave me his assent."(Ricarte)

-- that same day, Ricarte makes a declaration stating his "great reluctance" over the oath-taking amidst what he described as "dirty or shady practices in the manner" of the Tejeros Convention elections and his doubts about his capacity to serve as chief general. (Alvarez's memoirs describes the oath-taking a having been done surreptitiously and with posted guards ready to eliminate unwanted Magdiwang figures who would try to break through the proceedings).

19 April 1897 - The Supremo and other signatories sign the Naik Military Agreement declaring that several Filipino revolutionaries (referring to but not naming the camp of Emilio Aguinaldo y Famy) had committed treason against the nation and the revolution by negotiating for peace with the enemy Spaniards.

24 April 1897 - Bonifacio confides his fear that his company seems to be in danger not only from the Spanish enemy but, also, from the local [Caviteno] revolutionary leaders in a letter to Jacinto. The Supremo also writes about the detestable acts of treason/collaboration with the enemy Spaniards that was engaged in by certain Magdalo members, partisans of Aguinaldo such as Tirona, Mtro. De Guerra, Jose del Rosario, Jose Caelles, and "almost all Tanza residents along with the priest there," as well as the fraud and anomaly that characterized the Tejeros Convention.

27 April 1897 - "President" Aguinaldo sternly orders that the Bonifacio brothers be seized and brought before him dead or alive. Assigned were Col. Agapito Bonzon (alias Intong/Yntong), Felipe Topacio, and Jose Paua/Pawa (alias Insik Pawa) who, along with some men, leave Naic for Indang in the afternoon. (Alvarez) [Note: Other sources place this day of order as April 26]

28 April 1897 - The Supremo and brother Procopio are treacherously abducted by the forces of Bonzon and Paua who return in the morning. They violently attack the Bonifacio brothers and men in a surprise move that instantly kills Ciriaco Bonifacio. (Alvarez). [Note: Other reports will point to the afternoon of April 27 as the time of the Bonifacio abduction]. Bonifacio's wife, Gregoria de Jesus, is also abducted and brought to Naic, with the weakened Supremo brought in a hammock. His wife is raped by Yntong. (Court martial record tell of unsuccessful rape; but recent sources tell rape did occur, such as Ocampo, cited in Duka).

5 May 1897 -  The Supremo is not allowed to deliver a defense speech, with the official records showing that the request has been turned down (twice) supposedly because Bonifacio has only been repeating his account made during the court examination.

The counsels make their speeches. The court-appointed lawyer of the Supremo, Placido Martinez, is rather scandalously a Council of War panel member and attacks the Supremo, prejudging him for his supposed "evil" act of trying to kill Aguinaldo, before begging the court that clemency be granted his 'client.'

6 May 1897 - The court martial declares the Bonifacio brothers guilty and deserving of the punishment of being shot to death--despite Giron being the only one to testify about the supposed plan to assassinate Aguinaldo and the Supremo's gun actually having been unfired. The decision, subsequently for forwarding to Aguinaldo, are signed by Mariano Noriel, the Council President, Tomas Mascardo, and Esteban Ynfante, and attested to by Council Secretary Lazaro Makapagal.

8 May 1897 -  Baldomero Aguinaldo upholds the Council of War decision declaring the Supremo and his brother 'guilty' of supposedly (a.) firing at "government soldiers;" (b.) intention of "overthrowing the government" and killing Aguinaldo based [mainly] on Giron's testimony; and (c.) using money to induce "government soldiers" to transfer allegiance to him.

10 May 1897 - The Supremo and his brother Procopio are  taken out of their cramped prison and brought to the mountains of Maragondon, Cavite. There will be three different different accounts of the 'execution.' One is that the Bonifacio brothers were shot to death; another, to be claimed by Makapagal, is that the Supremo attempted to flee after Procopio was shot; and another is that Bonifacio was hacked to death.

Apolinario Mabini would describe Bonifacio's supposed execution as an "assassination"...as a  "crime" on the part of Aguinaldo that "was the first victory of personal ambition over true patriotism."

________. The conspiracy of Edsa 2: how Gloria Arroyo managed not to let President Joseph Estrada finish his term. http://jesusabernardo.newsvine.com/_news/2008/02/25/1324358-the-conspiracy-of-edsa-2-how-gloria-arroyo-managed-not-to-let-president-joseph-estrada-finish-his-term

________. The Wiretapped Case of the Bogus Presidency of Philippines' Gloria Arroyo ("Hello Garci" in English). http://jesusabernardo.newsvine.com/_news/2008/06/30/1627254-the-wiretapped-case-of-the-bogus-presidency-of-philippines-gloria-arroyo-hello-garci-in-english

1897 - The fraudulent and controversial Tejeros Convention elects the new officers of the Philippine revolutionary body, with Andres Bonifacio y de Castro, head of the Kataastaasang Kagalanggalangang Katipunan nang manga Anak nang Bayan (KKK) , the original secret-society-turned-revolutionary-government fighting the colonial Spaniards, being elected Interior Director and Emilio F. Aguinaldo, the President; the convention could possibly have ended peacefully had Daniel Tirona, months earlier accused by the Supremo of disseminating propagating poison letters against him, not objected to Bonifacio's election, supposedly on grounds of lack of qualification when he scandalously disrespected the results and insulting the Supremo by loudly shouting "Let us elect Mr. Jose del Rosario, the lawyer!"; prior to the election, Bonifacio had been warned by a Magdiwang officer, Diego Mojica, about Tirona's distribution of pre-filled ballots with Magdalo names in them; Bonifacio, who has been lured into Cavite so he can supposedly unite the Magdalo and Magdiwang KKK factions of the province, with the Magdiwang said to be accusing the former of wanting "to rule all and the entire Philippines"; Bonifacio, who also earlier learned of "the underhand work of some of the Imus crowd who had quietly spread the statement that it was not advisable that they be governed by men" from outside pueblos, will soon issue Acta de Tejeros declaring the corrupt elections invalid, but unfortunately, be caught by Aguinaldo's forces before reaching what has been speculated to be either Manila or Batangas that, according to the Supremo, "has organized a provincial government " placed under his orders; Aguinaldo's forces would charge the Supremo and his brothers with "sedition" and be found 'guilty' by a kangaroo court martial wherein the assigned defense lawyer himself condemned Bonifacio; the Tejeros Convention would be later be condemned as a coup and counterrevolution by more progressive historians.