Why I am Voting Joseph "Erap" Estrada

Why vote for him in his renewed bid for the presidency  this coming May 10, 2010 elections? There are several very good historical, moral and practical reasons why I support him. In this evolving post in the countdown to election day, I explain my vote.

1. Erap is a Nationalist.

In September 2009 speech, Sen. Juan Ponce Enrile took to the Senate floor  in defense of the former President against the tirades of now-Senator-on-the-run-for-murder-raps Panfilo Lacson. In his  characterization of Estrada as a matter of personal privilege, he recounted the struggle of the nationalists, Estrada well included, in moving to terminate the protracted RP-US Military Bases Agreement. 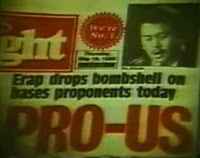 Enrile describes Estrada as someone who has "proved to be a true nationalist," being part of the eleven other Senators who dared vote for the abrogation of the Bases Agreement. This came despite the strong lobbying done by the pro-Bases advocates, led by no less than President Corazon C. Aquino. The pro-Bases forces tried to push for the extension of United States military presence in the country, some 92 years after the Americans colonized the land and over four decades after the Bases Agreement was first forged. Estrada and the other anti-Bases senators were denounced as the "The Dirty Dozen" by those who had no sense to assert Filipino sovereignty; on the other, the progressive nationalist groups hailed them as "The Magnificent Twelve."

On April 19, 1988 during his 51st birthday, then-Sen. Joseph Estrada delivered his privilege speech for the abrogation of the U.S. Bases Agreement. Erap's words can still remembered for its stirring and clarion call for the nation to muster its will and courage to assert its independence and take on the path of self-sufficiency:

Let this be our finest hour as we face the judgment of history. We have become so dependent on the Americans that we have not learned to be self-sufficient. Our country has been seen as a nation of beggars, a nation of prostitutes, a nation of cheaters, a nation of domestic helpers. And if we do not assert ourselves today, we will also be known as a nation of cowards. This I cannot accept and this, we must not accept.

The role of the 12 Anti-Bases senators in heeding the sovereign call for real Philippine independence free of the military presence of its former colonizers cannot be discounted. Prior to his vote, Erap even did his laudable part in the propaganda campaign to bring the issue to a people long bathed in colonial conditioning with the movie he produced himself, "Sa Kuko ng Agila. " Co-starring former Sen. Nikki Coseteng,  the movie took potshots at the American bases in anticipation of its scheduled expiration in 1991.

Estrada  obviously did not do the abrogation of the neo-colonial treaty himself. Even prior to the "Magnificent 12" senators, the likes of Claro M. Recto came before in the decades-long campaign against what was then the greatest symbol and tool of continuing neo-imperialist US influence in the country. However, Estrada's use of popular cinema--with his craft, charm and connection with the masses--undoubtedly proved an effectively tool that helped crystallize the cause of Anti-Bases movement in the masses' mind and ready the Filipinos for the historic change the true patriots and nationalists have long been aspiring and working for.

Philippine Lent 2010 from the lens of a doubting patriot

I gave in to taking part in the Catholic Filipino tradition of “Visita Iglesia”, a form of penitence involving the visit to 14 (or lesser variations) Churches and the solemn prayer of  the Stations of the Cross in each stop. The Good Friday experience somewhere in the north comes not from the perspective of a religious devotee but, rather, from an open-to-religion nationalist student of history who can’t seem to let go of the blows Western colonialism dealt to the pride of her race, the indigenous people of the isles called the Philippines.

My group completed seven Catholic Churches, each of which was marked by purple drapes covering all the icons in the altar, chancel, nave and sometimes the narthex area of the temple interior. Not everything was covered, so I had the chance to marvel at the spiritually uplifting beauty of Christian architecture and dome painting and, in some instances when the karo slated for the Easter procession were already being prepared, even the icon sculpture. Beyond the artistic merits of Churches in the Philippines, my Visita Iglesia got me to contemplate on the role Christianity played in the colonial history of Filipinos and Filipinas.


The Catholic Church & Spanish Colonization of the Philippines

While most of the religious tour members prayed or read from the Stations of the Cross pamphlets at every church stop, I got myself to kneel and sit down on a pew. I engaged in a sort of meditation, true, but it was more of my mind drifting to the Spanish colonial times and wondering how the Christian religion factored in three centuries of subjugation of the peace-loving early Filipinos.

How could the Christ, a holy embodiment of sacrifice and martyrdom, have given rise to a religion propagated by forcible means of colonization, at least during the height of the Church's power? How is it that Christ’s name was used by the alien Spaniards in the colonial, unkind, unjust, even racist, control of the primarily Malay and Indones people of “Las Islas Filipinas” and the exploitation of their natural resources? Did not those Spaniards (and the Pope's Church for that matter) find it unchristian and blasphemous to advance their empire’s interest with the use in part of God’s name?

How about having used Filipino elites to control the masses, as well as the pitting of “indios” against fellow“indios” from different regions to maintain colonial dominion of the archipelago? How easy was it for those Spanish friars and government officials to gloss over the immoral, unholy incongruence of Christ’s teachings with colonialism? Nineteenth century propagandist hero Graciano Lopez Jaena perhaps gives an answer with his Fray Botod character --a fat and lecherous priest with a false piety that always had “the Virgin and God on his lips no matter how unjust and underhanded his acts are."

As I was looking at the pews lit by the stained-glass filtered sunlight, I imagined how some 200 or so years ago, pious, meek, more-or-less downtrodden brown-skinned Filipinos heard mass officiated by some friar who stood out both by way of his pale-skinned, chiseled-nose features and his power over the sea of “subjects” inhabiting his king’s territory-archipelago in the Southeast.

In between Church stops, our group was treated to what foreign tourists would describe as the “spectacle” of self-flagellating penitents. Virtually in all the routes leading to every church we visited, numerous mortifying half-naked, masked men did their thing. Those we caught lying prostate caused us some traffic delays.  Looking at their very bloody red backs, I initially thought they were “colored by some red dye applied to the whips because they just seemed so red and so rather profuse to be real, but real blood it was.

The penitents scourged themselves with whips (”burillos” supposedly tipped with sharp objects, such as bamboo splices) while in sort of processional route to a church. A few carried a cross but in all cases, the penitents seemed to have made periodic stops in which they laid more or less prostrate on the hot ground while some assistant(s) did the whipping of the back and even the legs using the penitents’ lash or some other whip.

Locals supposedly call the Good Friday penitents “kandarapa.” The mortification ritual is part of the kandarapa's “panata” or religious pledge, often made either in the bid to make God forgive or their sins or to ask for some difficult favor for themselves or some loved ones. The ritual serves as a reenactment of the passion of Jesus Christ while on the way to his crucifixion. The prostrate move, with arms outstretched and legs held straight together, symbolizes Christ's crucifixion on the cross.

The history of Lenten self-flagellation is uncertain but a commonly accepted version is that “Penitente are descendants of the Third Order of Saint Francis of Assisi,” with members who were basically lay people wanting to follow Christ’s teachings (or footsteps literally?). Spain brought the ritualistic practice to the Philippines and later, Filipino penitents supposedly compared their enactment of Christ’s Passion with the sufferings they endured under the abusive hands of the Spanish colonizers, specifically the friars and landlords.

Today, the Catholic Church in the Philippines makes it known that it officially disapproves of the practice of Lenten mortification, including the more extreme nailing to the cross mainly seen in the province of Pampanga. Makes me wonder whether the church ban in fact began during the colonial times when the practice the Spaniards themselves brought assumed the character of being a reflection of the injustice they wrought on the conquered natives of the land.

At the turn of the 19th century, the combined strength of local revolutionaries-transformed-into-Filipino soldiers and United States military forces drove the Spanish colonizers out of the country. American imperialist propaganda, however, made it appear that Spain "sold" its colony the Philippines to the US under the Treaty of Paris. The Philippine-American War ensued but the fledgling Philippine eaglets were no match for the colonizing bald eagle and the rest is mostly more unfortunate history.

Today, more than a century later, there are no more Spanish friars but only Filipino priests in the Southeast Asian archipelago. Although perhaps made not so obvious with its persisting colonial name of Philippines,* the country proclaims itself a wholly independent republic. How is it, therefore, that Lenten self-flagellation persists despite the Catholic Church's expressed disapproval? Could it be that vestiges of colonization remain in the former Spanish and American colony and that the self-flagellation ritual forms a way of showing to the Christian world the prevailing hypocrisy of the ruling elites, locals and otherwise, in their rule over the land?

*The Philippines was named after King Philip II (El Rey Felipe II), the reigning monarch during the time the archipelago was first settled/colonized by Spain. It was called Las Islas Filipinas and Philippine Islands during the Spanish and American colonial period, respectively.