SEPTEMBER 12, 2007 marked a black-letter day for the real state of justice and democracy in the Philippines. The media coverage of the promulgation on the Plunder case of former Philippine President Joseph “Erap” Estrada was effectively disallowed by the Supreme Court ruling that ridiculously limited the view of the TV camera to the bench proceedings and ensured that no view of the defendant was shown to the public

The much-awaited verdict on the Plunder case of Estrada was read in the office of the anti-graft court Sandiganbayan amidst tight security and practically nil "live" media coverage. Ruling on an appeal, the Supreme Court of the Philippines had earlier granted the request of the media organization Kapisanan ng mga Brodkaster sa Pilipinas (KBP) under ridiculously restrictive conditions. In a decision that plays lip service to "freedom of the press," the highest court in the land—the same body that defended the biased presence of its chief justice in the EDSA 2 revolution, which toppled President Estrada in 2001, as akin to attending a "party"—ruled that the coverage of the Erap verdict be restricted to the bench reading of the judgment and that the sole television camera be operated by the court's media office. 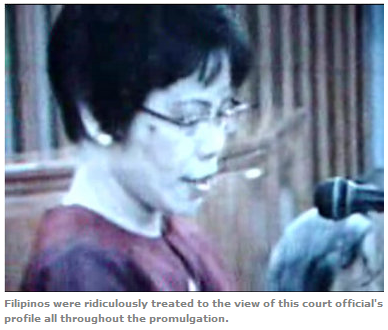 The ruling was a hopelessly and undemocratically ridiculous instance of the suppression of the freedom of the press and information of the Filipinos. The coverage of the court proceedings without a shot of the former Philippine President's countenance during the passing of the verdict practically meant no coverage at all. Ano naman ang pakialam ng mga Pilipino sa mga mukha ng kangaroong mahistrado at sa tagabasa ng desisyon? Bakit tila inutil o nabubusalan ang media kapag ang panig o karapatan na ni Erap at oposisyon ang dapat marinig?

With this brazenly censoring decision, the Supreme Court ruled to deny the Filipino people the right to witness, via telecast, the unfolding of a most important moment in the country's history. Why the Joseph Estrada impeachment and the ensuing mutinous EDSA 2 were covered in sensational full detail, while the stark opposite applied to the Estrada Plunder case smacked of a devious political machination by current President Gloria Macapagal-Arroyo. 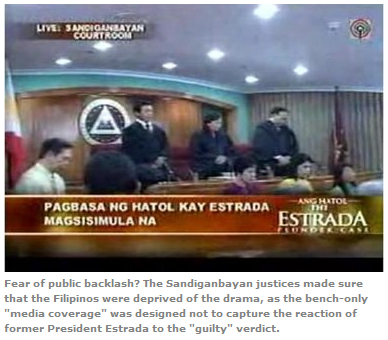 The unmistakable inference to draw from this is that an ingloriously beholden Philippine Supreme Court connived with the administration in order to preclude the anticipated public unfolding of a dramatic "guilty" verdict scenario, and thus, try to prevent a congruence of sympathies for Estrada. As if indeed a piece in a grand scheme, the anti-graft court actually passed a “guilty” verdict on Estrada for the count of Plunder. Not surprisingly, the former President’s family already expected the decision, saying a few hours beforehand that they feared for a “political decision” of conviction for Estrada.

Sober-thinking, patriotic Filipinos can only sigh in frustration, and hope for the time when all the injustice, charade of presidential "legitimacy" amidst national electoral fraud, degenerate leadership, unparalleled corruption and unprecedented national economic woes will ever end. Until the time the Filipinos muster its strengths, uphold its virtues and assert political sanity in order to take the necessary step of rectifying the grievous blunder of Edsa 2-cum-Arrobo usurpation of Malacanang, the pathetic nation called the Philippines is unlikely to see the good end of a hellish rule for some time.

Ahhhh, isn't the Philippines doomed??? If only the Filipinos can invoke the spirit of the late father of Arroyo, the righteous former President Diosdado Macapagal, and implore him to now take his petite daughter along and share with her the eternal peace of life on the other side....