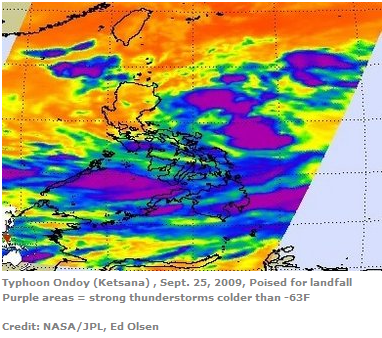 IN the face of the devastation and casualties wrought by typhoon Ondoy, the Catholic Bishops' Conference of the Philippines head Rev. Angel Lagdameo asks whether God is giving the Filipinos 'hints' of the "future and even the coming elections?" He wonders whether there is a connection between all the corruption and lies, the loss of integrity and the mounting "destruction of morality and moral values" under the government of Gloria Arroyo and the natural "calamities occurring in increasing number and intensity." 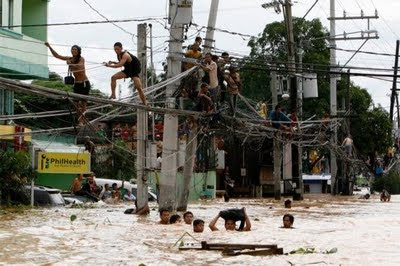 According to the website of the United States National Aeronautics and Space Administration (NASA), the typhoon's interaction with the seasonal southwest moonsoon gave a "record 13.43 inches of rain fell in Manila in the six hours between 8 a.m. and 2 p.m. local time, which is equivalent to about a month's worth of rain for the area." The resulting enormous flash floods washed away homes, cars, downed fence walls, stranded people in the streets, drowned others, and sent even city people to rooftops and the desperate crossing the cables of electricity posts for safety. Typhoon Ondoy (Ketsana) left the capital and other parts of Luzon island devastated, with over 300 dead and damages worth P2.75 billion to infrastructure and P6 billion to agriculture. 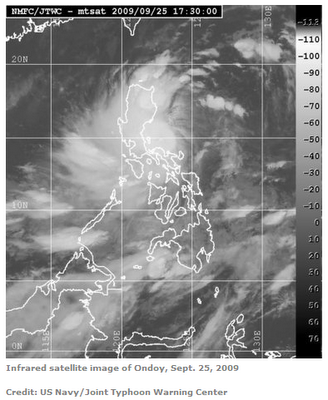 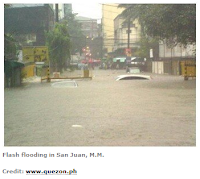 Why don't the bishops partly take responsibility for the Arroyo evil? After all, the Philippine Catholic Church by and large supported the ouster of former President Joseph Estrada and the para-constitutional installation of the Illegitimate back in early 2001.

What follows is a look back to the eight-year Arroyo-Church relations based on my August 2006 and 2008 archived articles. 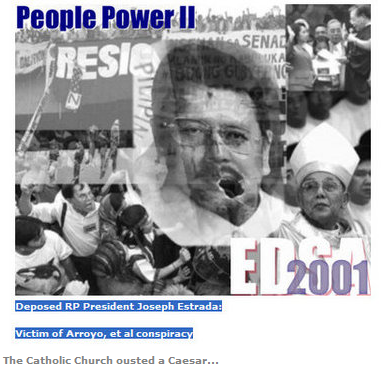 Back in early 2001, the Catholic Church was instrumental in the constitutionally anomalous ouster of Joseph Estrada and in Arroyo's succeeding as President. Crucial to the success of the EDSA 2 mob that deposed the hugely-popular-with-the-masses Estrada and installed bogus "President" Arroyo was the support of the Manila portion of the Catholic Church led by then Cardinal Jaime Sin. 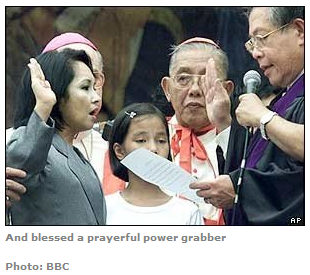 Seemingly blinded by Arroyo's facade of Catholic religiosity, then-archbishop of the Archdiocese of Manila committed the seditious sin of going against Caesar by conspiring with then-Vice President Arroyo, former presidents Fidel Ramos and Cory Aquino, Supreme Court Justice Hilario Davide, and certain elite members of business, military, and even the media to grab the presidency using the cloak of "People Power." Cardinal Sin first exhorted Filipino Catholics, including minors from Manila Catholic schools, to rally and pressure Estrada into resigning, and when it became clear that the properly President would not give up, to depose him only 2 1/2 years into his term, supposedly on corruption and moral grounds. 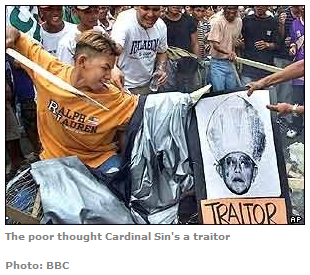 August 2006 - The bishops should undo an Arroyo wrong


Data from a top independent survey firm show an alarming trend of double-digit incidence of hunger in over straight years. Corruption in government ballooned to unprecedented levels such that since Arroyo's ascent to power, Transparency International has consistently rated the Philippines with having endemic corruption. Violations of human rights are back to, or worse than Martial Law levels, 25 years ago. The gory deaths of two university coeds add to the hundreds of extra judicial killings recorded in only five years. Amid all these crises, the Filipinos have been waiting for the Church leaders to beckon them to a moral but decisive course of action. 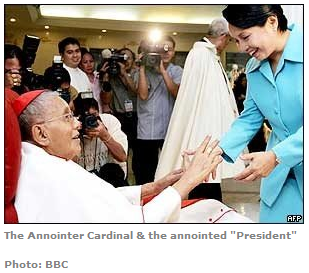 The least the bishops should really do now is to collectively declare support for the impeachment in order to boost its chances of passing through the administration-controlled Congress. The more ideal move, though, would be for the Catholic Church to join in the clamor for Arroyo to step down, as it so loudly and boldly did against then President Joseph Estrada. But as the CBCP, the official organization of Catholic episcopacy, chose to remain lame and tolerant towards a publicly pious regime but which runs the country like hell, any sensible Catholic can't help but question and suspect.

It is perplexing how the wise fathers can continue to believe Arroyo's virtual reality of good governance and moral leadership. Is it that in the Church's calling to influence state policies affecting morals, they have elected to regard the stifling of basic political freedoms as necessary collateral damage? Or is the CBCP simply afraid to admit that the EDSA II Revolt, which deposed her predecessor, was a debacle of grim national proportions? Or are the bishops perhaps amiss with the spirit of humility such that they refuse to atone and undo their Arroyo wrong? 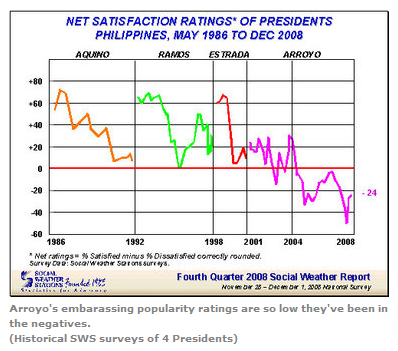 Not since the Spanish colonial era has the Catholic Church in the Philippines enjoyed the kind of influence it wields under Mrs. Arroyo's reign. Is it not enough that the devoutly religious Filipinos have tolerated the blurring of the divide separating the Church and the State? Only a month prior to the impeachment issues, the Church lauded the repeal of the death penalty in an unusually hasty action by Congress. When its leader Rev. Angel Lagdameo restated a few days later that the CBCP will not stand to support another impeachment nor will ask Arroyo to resign, the bishops have invited seemingly valid suspicions that the Church is as power hungry as the President it helped install. It is either that or in the crusade to save the unborn and the capital offenders, the Church in the Philippines blindly refuses to break its pact with the devil.

An essential element to goodness is to admit to a wrong, no matter how heinous and collective, so that the wrong can be undone. Just recently, Ex-President Aquino recently publicly admitted to her wrongful part in the EDSA 2 uprising, and apologized to the deposed and defamed President Estrada in no uncategorical terms. 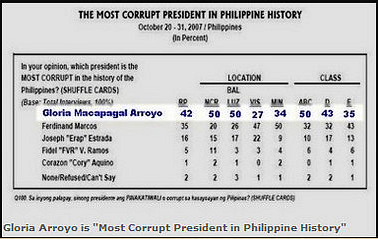 The Filipino cardinals and bishops can do no less. Archbishop Oscar Cruz has already written about Arroyo's "consistent high rating in corruption in form of big guile and gross deceit in the management of public funds [and] a continuous low grade of approval in terms of pervasive distrust and enormous dissatisfaction." However, if the local Catholic Church is to regain its moral ascendancy in the Philippines, the CBCP would have to officially admit to their seditious role in EDSA 2 with as much consensus as they wielded in calling for Estrada's resignation and ouster back in 2000-early 2001, and in installing and continuing to support an Arroyo who never had the genuine mandate to serve as president. Next step is to help give back to the Filipinos the right to be governed by the leader they have truly elected and not just any one falsely legitimized by a conspiracy of powerful elites.

Undoing the terrible wrong that is Arroyo is righteous because it is the spiritual and social responsibility of the Church to fight the cloud of evil reigning in the land. It has erred against the people and against the Church when it conspired against a properly elected president. Only by helping ensure righteous and popular governance in the land can there be a chance of regaining the Filipino Christmas spirit that is merry in both righteousness and material grace.


[In exchange for Catholic prelate support], she practically adopted Church teachings on population planning and even gave in to Church pressures against the death penalty. Despite the backing of the Church however, Arroyo's presidency has been shown in periodic surveys as the most distrusted and disliked, with double figure negative trust ratings and with more than half of the population, the masses in particular, wanting her to either resign or be removed... 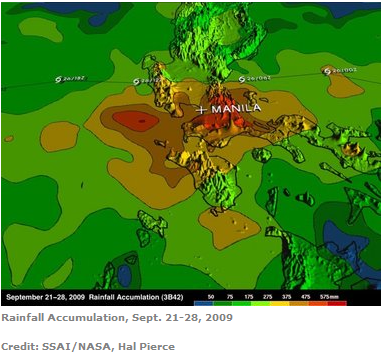 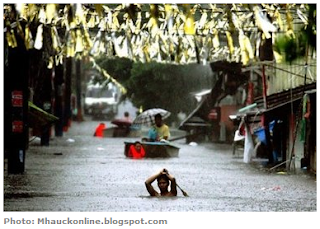 So clear that the Philippine Catholic church is in part responsible for Arroyo's reign of political immorality and disastrous governance. The government they helped install and have supported for so long is so corrupt and mismanaged it couldn't even give the capital region a semblance of decent preparedness for natural disasters. Many have decried that the government was nowhere during the critical hours of the Ondoy flash floods, with its responsibilities taken up largely by private entities and the broadcast media. 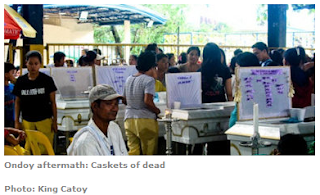 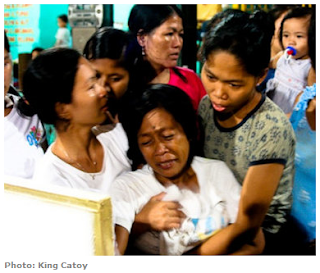 Lagdameo concludes the very politically polite CBCP statement with: Nagtatanong lang kami! We do not have the answer! That is why let us also pray!"The men in robes are unsure of the answers now but they were so sure what to do during the heyday of the anti-Estrada movement. The prelates and nuns should have just confined themselves to praying back in late 2000-January 2001. 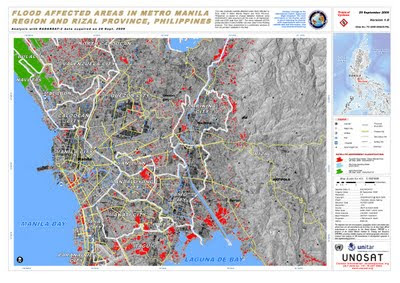 Bernardo, Jesusa. Will the Filipino bishops undo an Arroyo wrong? August 2006. Published at Sobriety for the Philippines Blog 4 May 2007. http://forthephilippines.blogspot.com/2007/05/archived-article-august-2006-will.html