The latest national survey on Philippine president Gloria Arroyo reveals once more the negative perception and sentiment of the Filipinos towards her presidency. Just a few weeks earlier, in October 2007, a different survey by the Pulse Asia group revealed how Filipinos regard her as the "most corrupt" president, beating the late dictator Ferdinand Marcos to the title. True to her apparently indurate character, seven years of unofficial public expression to her regime have sadly only fallen on deaf ears. 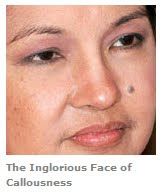 According to the last quarter survey of the Social Weather Stations (SWS) polling firm for 2007, Arroyo's net satisfaction performance rating (satisfied minus dissatisfied) is now negative 16 percent, 5 points down from the past quarter's -11 mark. Dissatisfaction with the president rose in almost all geographic areas and across all socio-economic brackets. Even her traditional 'bailiwick', the Visayas islands, registered negative, and so did the upper social classes from which base she gets some support.

The negative mark came despite the general public approval of the executive clemency she granted to former President Joseph Estrada in October. The same survey showed that 54 percent of Filipinos approved of the pardon to Estrada who was accused, tried and found guilty of Plunder under very controversial circumstances. Another earlier survey by SWS presented the majority belief of Filipinos (62%) that Estrada did not engage in corruption during his term; majority also expected his acquittal from the charges pinned against him by Arroyo's government . Historical surveys from 2001 until 2007 have depicted how Filipinos increasingly disbelieved the accusations of Plunder against Estrada.

Arroyo came to power in 2001 through EDSA 2, a civilian-backed military uprising that removed Estrada from power. The International Herald Tribune reported that the "opportunist coalition of church, business elite and left," and former Presidents Fidel Ramos and Corazon Aquino orchestrated the uprising that culminated with the defection of the top military brass.

The defamed President was elected in 1998 with the highest percentage of plurality lead votes in the entire electoral history of the Philippines since gaining its Independence: Estrada garnered a lead of 23.7% from his nearest rival House Speaker Jose de Venecia. Following his arrest on charges of Plunder by the Arroyo administration, a much larger civilian uprising known as EDSA 3 tried, but failed, to reinstate Estrada in May 2001 because of the lack of the prerequisite military support.

The only President to Ever Score Dissatisfaction 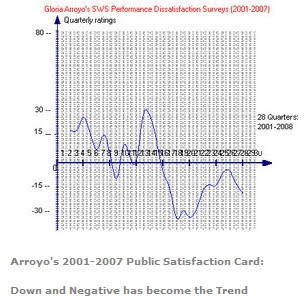 Arroyo is the only president, since 1986 when the SWS surveys on Philippine presidents began, to ever receive negative net performance ratings, and for persisting periods, at that.. Even the predecessor she helped depose, President Joseph Estrada, never crossed the neutral or zero level satisfaction rating. Well into the height of the "Erap Resign" demonstrations led by two former Presidents and herself, the business elite and the Roman Catholic Church, Estrada held on to a +9 net public satisfaction rating in the December 8-17 last quarter survey of 2000.

As a matter of fact, even as Vice-President, Gloria Arroyo already earned the dissatisfaction and distrust of the Filipinos. The same fourth quarter SWS survey for 2000 demonstrated a foreboding of what would be her place in public perception for the next seven years. Apparently because of her role in the 'Erap Resign' movement calculated to benefit her as the constitutional successor, the survey firm reported that Gloria suffered "EXTREME CUT IN POPULARITY," earning her "a -4 (36% satisfied vs. 40% dissatisfied), compared to +63 (73% satisfied vs. 11% dissatisfied) in the previous quarter." 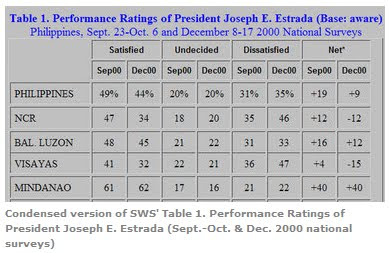 Additionally, SWS president Mahar Mahangas' report on their last survey on Estrada's presidency, showed that the former leader enjoyed a relatively high +11 net national trust rating; in stark contrast, the same survey presented a net distrust rating of 11 points for Estrada's next-in-line. The survey that measured the trust confidence of the people was conducted some two weeks before Estrada was forced to leave Malacanang (January 6-9, 2001).

The president to hold the distinction of having received the lowest net SWS satisfaction rating next to Arroyo was Fidel Ramos, who received net ratings of +1 and +2 in two quarters of 1995; however, even the former leader considered to be a "minority president" never crossed the negative line of public satisfaction. 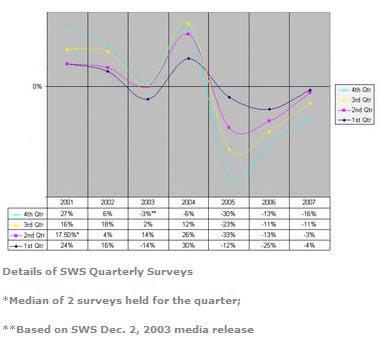 Uncannily for a President that was supposed to have been installed by popular uprising and likewise supposed to have won the May 2004 elections, Arroyo has suffered negative net satisfaction ratings for practically 15 out of her total 28 quarters as president, or over half of her regime. Only two years into Arroyo's administration, the incumbent leader dubbed by Estrada's supporters as the "power grab president" began her nearly consistent show of negative satisfaction, as according to SWS periodic survey studies. Even her "best" consecutive show of two quarters in 2004 is tainted with doubt because there were allegations that her administration unduly influenced the SWS survey results during the period by sending "advanced" PR and outreach mission teams to the targeted SWS sampling populations, the knowledge of which they somehow managed to obtain.

Filipinos' dissatisfaction with Arroyo has been so negative so much so that she has practically lowered the benchmark for surveys on presidents. Every time there gets to be a percentage movement nearer zero level, Arroyo's drumbeaters would joyously proclaim that she has gained public acceptance--seemingly forgetting or ignoring the fact that her overall performance is still adjudged as negative or unsatisfactory. Where before, social weather polls that showed presidents were nearing the dissatisfaction mark would set them into almost a state of panic and take appropriate measures, Arroyo's continued unsatisfactory performance betrays her callous regard of what the Filipinos think. 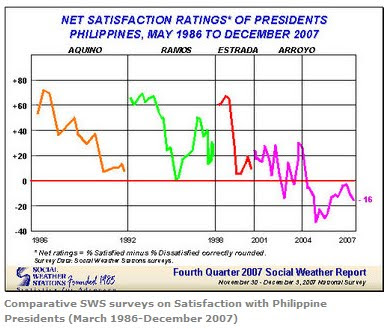 The highest public level of net satisfaction rating she obtained was +30 percent while the lowest rating was -30 percent. The country's past post-Martial Law presidents all shared satisfaction ratings that nearly hugged the +70 percent at their peaks and of course, never once fell into the embarrassing position of being negatively adjudged by the people. The extra-constitutional ascent to power, an almost endless litany of corruption issues, and allegations of cheating in the May 2004 elections that have marked Arroyo's presidency are generally thought to account for her protracted very unsatisfactory performance.

Survey held weeks before the Sandiganbayan judgment, which shows an overwhelming majority of Filipinos now do not believe that Estrada engaged in corruption as President (September 2-5, 2007 Social Weather Survey:
Majority expected Erap to be acquitted.) http://www.sws.org.ph/pr070912.htm

(Results of Past Presidential & Vice-Presidential Polls in the Republic of the Philippines.) Philippine Presidency Project. http://www.pangulo.ph/election_results.php
Posted by Jesusa Bernardo at Saturday, October 03, 2009

Check out Rhetoric vs reality by the Daily Tribune's Dinah Ventura.