25 Years of EDSA: A Legacy of Disempowerment, Amorality, & Greater Poverty

TWENTY-FIVE years after EDSA 1, a quarter of a century after the "fascist" Ferdinand E. Marcos dictatorship was dismantled, the Philippines is in WORSE straits. We should repudiate, NOT celebrate, the "People Power" of 1986, as well as the 2001 EDSA II, for its end results. Instead of uplifting the condition and morality of the Filipinos, it led us deep into the quagmire of greater poverty and virtual amorality.

Whereas, during the Martial Law period, the opposition's mantra was "clean and fair and honest elections," today, some well-educated Filipinos openly HAIL electoral cheating, thanking Gloria Macapagal-Arroyo for the 2004 "Hello Garci" POLL FRAUD that prevented the presidency of Fernando Poe, Jr. (FPJ).

By the way, no one among his classmates raised hell over his pro-poll fraud comment.

"well jesusa i would rather have poll fraud or insult the few... that garci incident is a saving grace for all of us because if fpj became president we would end up a 4th world country or maybe we would end up in the movies."

"insult the few? lol. eh di sana hindi na nandaya si arrobo dorobo. anyway, as i said, i've got to give it to you for your honesty in embracing the crime and immoral act of poll fraud and insulting the wisdom of the people. :)"

The most pronounced and despicably massive cases of poll fraud and cover-up were the 2004 Hello Garci and the recent 2010 Hocus Pcos elections benefiting Arroyo and the incumbent "President" Benigno "Noynoy" Cojuangco Aquino III, respectively. What's even more revolting is that the political and business elites conspired to oust the only genuinely democratically post-Marcos President, Pres. Erap, practically from Day 1 of his term.

In terms of greater poverty, those who have lived long enough to be able to compare the Marcos days with the next era, particular after the EDSA 2 coup against Erap, simply can tell how more difficult life has become in this country. Very high electricity rates--in fact one of the highest in the world-- and higher food prices and transportation costs. Kahit na maraming kababayan natin ang OFW at sumusuporta sa ekonomiya, marami nang kumakain ng "PAGPAG" (kaning baboy) ngayon. Sa payak na pananalita, MAS MAHIRAP mabuhay at gumalaw. Walang pasalamat sa EDSA.

As of 1997, the Philippines was "a major destination for paedophiles... Poverty has also turned rural Philippines into a huge exporter of cheap labour."
http://books.google.com/books?id=kSKlqr0QcXgC&pg=PA52&dq=%22poverty+index%22+philippines&hl=en&ei=-sNlTe_eK9HwrQeIm6XaCg&sa=X&oi=book_result&ct=result&resnum=6&ved=0CEAQ6AEwBQ#v=onepage&q=%22major%20destination%20for%20paedophiles%22&f=false

From 1994-1996, the percentage of those earning less than $2 per person a day was 63%, based on the 1999 UN Human Development Report.
http://books.google.com/books?id=hmEptCPHMEgC&pg=PA511&dq=%22poverty+index%22+philippines&hl=en&ei=-sNlTe_eK9HwrQeIm6XaCg&sa=X&oi=book_result&ct=result&resnum=8&ved=0CEsQ6AEwBw#v=onepage&q=%22poverty%20index%22%20philippines&f=false 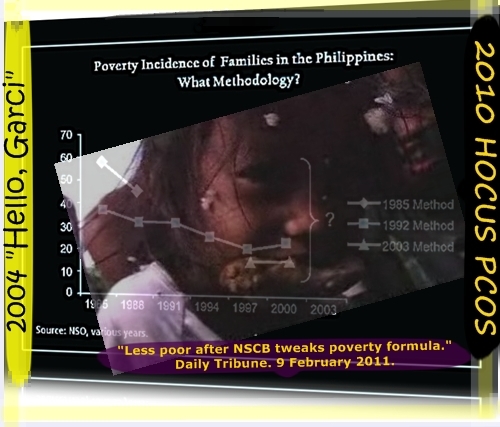 It should be noted that OFFICIAL poverty statistics surprisingly show a decrease in the number of poor Filipinos from the Marcos years until today. The official figures have long been suspected to be 'doctored' somehow, particularly during Arroyo's time. Asian Development Bank's Karin Schelzig points to one explanation behind the seeming disconnect of the official figures with poverty on the ground:

"Despite a long tradition of poverty measurement in the Philippines, trends in income poverty are not straightforward as one might hope. The most important issue is that there have been two major methodology changes [instituted by the National Statistics Office] since the poverty incidence was first estimated for 1985. The first major change occurred in 1992, and the second in 2003. In essence, there are three different poverty series in existence for the Philippines..."
http://books.google.com/books?id=iVIW-Qh50HoC&printsec=frontcover&dq=%22poverty+in+the++philippines%22&hl=en&ei=09VlTbDMK4H0cbag3I4M&sa=X&oi=book_result&ct=result&resnum=1&ved=0CCYQ6AEwAA#v=onepage&q=philippines&f=false


Actually, just recently, the The National Statistics Coordination Board (NSCB) tweaked the survey method again "by reducing the computation of those under poverty line from those earning P41 per person per day to just P37 per person per day" as reported by the Daily Tribune. Applying the new computing method, the number of poor Filipinos in 2009 was reduced to only 23 million from the 27.6 million based on the old method. Schelzig concludes that (official) figures on Philippine poverty may underestimate urban poverty because of survey methods, and that they may be "worth less in real terms" because poverty lines failed to keep up with inflation over time. With the recent THIRD change in methodology for estimating poverty and the glossing over of high inflation, official poverty figures have been rendered more of illusory and sallowly propagandistic.

The sad, pathetic state of hunger of millions of the Filipinos under the yellows is perhaps well symbolized by the documentary of Ferdinand Dimadura, "Chicken a la Carte" (see video below).  Winner of the 56th Berlin International Film festival competition for the Most Popular Short film category, the 2005 documentary shows how a Filipino breadwinner regularly gives Pagpag fast food table scraps, normally recycled for  animal consumption, as festive food for his family.

The EDSA legacy is not worth celebrating but, rather, condemning. Just look where the Filipinos are today. Our people have regressed not only economically but also in terms of political morality. It has become acceptable even for the normally idealistic youth to trash morals and democratic ideals just because they so dislike a popular but unacceptable-to-them presidentiable.

To be more accurate:

View this movie at cultureunplugged.com