Gloria Arroyo, "Hello Garci" and the Anniversary of Her Bogus Presidency 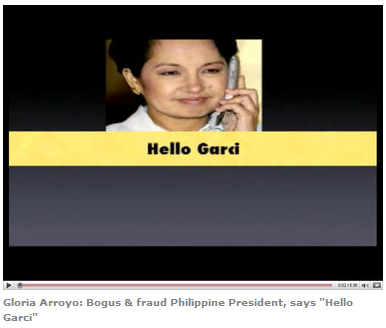 On June 24, 2004, a stealth operation of grave national impact was conducted by the Congress of the Philippines. Gloria Macapagal-Arroyo, the controversial sitting President who took power after the popularly elected Joseph Estrada was deposed in the undemocratic EDSA II conspiracy in January 2001, was proclaimed as the victor of the 2004 May 11 elections in a manner that defied the spirit of electoral victory and the essence of a "proclamation." At around 3:30 am--yes, Virginia, at such a still-dusky morning hour when most Filipinos are generally still tucked in their beds--Senate President Franklin Drilon and House Speaker Jose de Venecia raised the hands of Arroyo and proclaimed her "President-elect."

What explains the surreptitious proclamation that ensured the people who were supposed to have given the petite Arroyo the mandate of electoral victory (over "1 M" lead over opposition bet Fernando Poe Jr.) would not be able to share in a supposedly glorious moment is the conspiratorial story of cheating and cover-up sealed at the very halls of the Philippine Congress.

Up until that unprecedented pre-dawn proclamation, Congress was abuzzed with heated deliberations and debates over allegation of massive fraud during the May 11, 2004 polls. The predominantly pro-administration legislators, however, swiftly turned down every protest issue and argument raised by the lawyers and Congress supporters of Poe with the oft-repeated words "Noted" expressed by Senate canvassing committee head Sen. Francis Pangilinan. In the end, Congress, which had turned itself into a joint congressional canvassing panel, elected not to determine the real winner in the 2004 Presidential race by refusing to open the Certificates of Canvass from a few questioned provinces. The frivolous rationale given by the administration allies who made up the majority in Congress was as anomalous as the stealth manner of the 3:30 AM proclamation: it would take a "long time" to finish the canvassing. 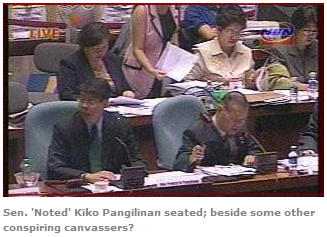 Never mind if the questioned COC's would show the real victor voted by the Filipino people. Apparently, the administration solons could not bear to delay the proclamation of their "president-elect"--their presidential candidate they have been allied with since 2001. So, with swift haste and dubious timing, the search for the real victor in the presidential race was killed. Congress proclaimed the controversial Arroyo as "President-elect," to be inaugurated as the 14th President six days later. 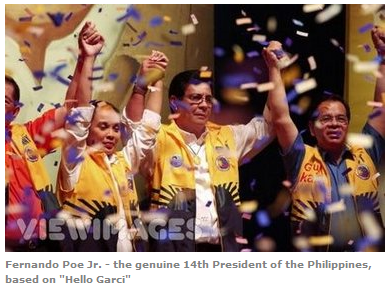 The Wiretapped Case of Electoral Fraud

Truth, even political truth, has a way of making itself known, however. Within exactly 12 months since the allegations of massive electoral fraud, tapes of wiretapped conversations would reveal the truth behind the apparently systematic efforts of Congress to cover up the May 11, 2004 and install a bogus president. 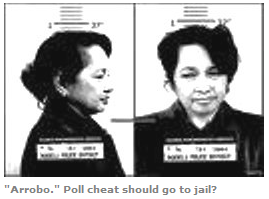 The tapes that have come to be known as the "Hello Garci" tapes primarily show the conversations between Gloria Macapagal Arroyo and elections commissioner Virgilio Garcillano in connection with operations surrounding the May 11 elections and vote canvassing. The operations revealed by the tapes were designed to cheat Arroyo's way towards continued hold on power and rob FPJ of electoral victory. The tapes around 3 hours long were revealed to the public through certain hostile members of the Philippine military. They show other voices, including certain military loyalist, and reveal an apparently broad conspiracy of electoral fraud perpetuated by Malacanang, the Commission of Elections and its "citizen's arm" NAMFREL.

The authenticity of the tapes, particularly the authenticity of the voices of Arroyo and Garcillano, has been verified by the companies Uniquest Pty (Australia) and Voice Identification (United States). Uniquest's Brian Lovell, forensic voice expert of note, expressed the professional opinion that "there is no evidence that would suggest that the conversations have been altered in any way from their original recorded form."

The following are the transcripts* of the more "telling" selections of the Hello Garci tapes, alternatively called Gloriagate tapes. The person addressed as "Ma'am" in the conversations, or "Code 1" and "PGMA" by the narrator refers to Gloria Macapagal-Arroyo; the "Gary" in the tapes is no other than the (former) Commissions on Elections officer Virgilio Garcillano. Discussed in the tapes are vote padding and manipulations in the counting , including those on COC's, and the role played by Commission on Elections (COMELEC) officers, National Movement for Free Elections or (NAMFREL), Philippine Army Generals, and "allies" in Congress in defrauding opposition standard bearer FPJ of victory.

Gloriagate No. 2 Delay Senatorial Canvassing
(Conversation between Gary and a female on 11:25 26 May 2004)

Gary: Hello, Ma'am
Female: Hello...,
...Is it possible that there will be a delay in the, the senatorial canvassing until after the voting on the rules tonight?
Gary: On the rules? Ah yes...
Female: ...in the Senate, so there will be no fight. Between two allies, this
...one will of course get mad, the other one, will also get mad for sure...

Gloriagate No. 7 Made to Cheat
(Conversation between Gary and One unidentified female believed to be PGMA on 29 1400hrs. May 2004)

Gary: Hello ma'am,
Good afternoon...
PGMA: Yes, yes...
PGMA: According to the other camp, they are planning among themselves (that) they say They are said to have affidavits in their possession--
--from teachers and Board of Canvassers (saying) that they witnessed and were made to cheat.
Gary: I do not have...
where could they have...?
that one earlier, what you mentioned on Pangutaran, it's like this:
it's true that, uh, that what appeared there, FPJ was reversed
...but the canvassing in the province...
...the results--what were put down were also the original - the original results were also the ones put down because of the words and figures were not changed.
PGMA: Mmmm, mmmm.
Gary: It is because they - Gen. Abahacon, is not yet an expert in such a thing, partly they're the ones who did there
PGMA: Mmmm
Gary: uh...The election officer of that, of Pangutaran explained to me also, uh...
PGMA: Mmmm.
Gary:But in the canvass, the Provincial Board of Canvassers said, what was done…but in the canvass, what were instructed by the Provincial Board of Canvassers, were the ones I did ...also his/her original votes, which were counted so there is nothing more...


Gary: Hello, Ma'am.
PGMA: Hello, also the what, the other camp, th...
...they're trying to get their NAMFREL copies of the Municipal COCs.
Gary: From NAMFREL ?
NAMFREL copies ho?
PGMA: Uh-uh
Gary: Ah, there is no more Ma'am, the NAMFREL is OK towards us,
...they are now sympathetic to us...
PGMA: Yes, yes but with this information, does NAMREL match our tally?
Gary: Yes.
PGMA: But that is that... ...the addition, the addition...
Gary: Yes, we, uhh,
...will get in advance uh, our personal copy if that's why they
GMA: Yes, yes, yes.
Gary: OK...
...alright, Ma'am.

PGMA: Hello.
Gary: Hello Ma'am,
Good evening.
You called?
PGMA: Yes...
...yes. According to Teng, it should perhaps be best if we can ensure that the documents in Maguindanao are consistent.
Gary: Yes, Ma'am. Uhh...yung uh, that...
...it is not really so much of a problem in Maguindanao...
...uh, but what was it that you texted last night as to the presence of uh...fake uh... precincts and I'm supposed to be the mastermind?
PGMA: Yes, yes...
Gary: But Ma'am what Ma'am.. I can't understand what, uh they are trying to drive at... when, uh... 120 days before elections the precincts were already established.
PGMA Ah OK, OK
Gary: Yes.
PGMA: Perhaps what, maybe it is just one shot in the dark. But I'm just letting you know everything I find out so we can always make uh...
...the appropriate remedies, o, yes?
Gary: Yes.
PGMA: OK.
Gary: Uh, General uh, Lomibao is already in Zamboanga...
PGMA: Yes, yes.
Gary: You can tell all the people uh, around us uh, talk to him...
...so that (will be able) uh, they will be able to prevent who is going to work.
PGMA: OK, ok...
...ok, alright. Thank you.

The tapes--and transcripts--speak for themselves. The role of Congress in the cheating or cover-up during the 2004 presidential elections is suggested, if not revealed in the tapes. In Gloriagate tape # 2, Arroyo asks to delay the senatorial canvassing "until after the voting on the rules." Tape # 7 contains the discussion between Arroyo and Garcillano regarding how an instance of the doctoring of votes was not realized at the level of provincial COCs because "the words and figures were not changed" by a General who was "not yet expert" in cheating. Juxtaposing this "Hello Garci" information with how the Joint Congressional Committee blocked the opening of the contested provincial COCs back in 2004, the sinister role played by decadent members of Congress in proclaiming a fraudulent Philippine President becomes clear. 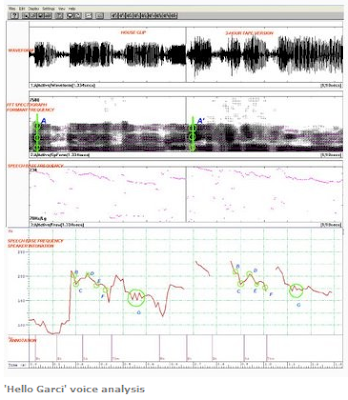 It has been four, tumultuous and corrupt-laden years since the stealth 2004 proclamation of the bogus 14th President of the Philippine Republic. A master of patronage politics, Arroyo has weathered the storms brought about by her illegitimate mandate "not once," but many times over. In fact, she has survived the public outcry that followed the disclosure of the wiretapped conversations, although the disgust over Arroyo's continued illegitimate hold on power is far from over.

Today, June 30, 2008 is actually the fourth anniversary of the proclamation of the 2004 bogus Philippine President. I have decided to give her this Hello Garci "relived" article as reminder that she will always be the Fake and Bogus occupant of Malacanang to the majority of the Filipino people.