Gloria Arroyo's forthcoming State of the Nation Address will again be a pack of lies. Only 14 out of every 100 Filipinos believe there will be any truth in the scheduled July 28, 2008 SONA, compared to the 86% percent who either disbelieve or remain undecided.

The figures come from the latest Ulat ng Bayan research survey of independent public opinion polling firm Pulse Asia. Not counting the undecided, the marked predominance of those who dismiss Arroyo's 2008 SONA as

not truthful compared to those thinking it will be truthful is seen across all demographic levels and social classes. The disparity of the number of skeptics versus those who tend to believe ranges from nearly 100 percent to over 400 percent in all categories of the respondents in the nationwide survey held from July 1-14, 2008.

A clear majority of those from classes A, B and C (36%) think that the scheduled SONA of Arroyo will not be truthful while only less than half (15%) believe it will be truthful. Among those in the D class, 41 % are skeptics while a mere 13% are believers.

In terms of age groups, the greatest disparity is registered in the 25-34 year-old group, with 48% thinking the SONA will be fictitious while a very small percentage (11%) think it will be factual. Even among government personnel, an overwhelming majority is skeptical whether the SONA of Arroyo: 39% believe it will be untruthful while only 15% think it will be truthful.

Among the college graduates or those with post-college education, the percentage of those who believe that Arroyo will lie in the SONA is much higher over those thinking she will not lie (34% vs. 12%). This belief is shared by those without any formal education, although the disparity is higher: 43% are skeptics while only 16% tend to believe.

Almost the same total number of Filipinos have adjudged Arroyo to have been untruthful in her past SONAs compared to those who think she has been truthful (14% vs. 13%). According to Pulse Asia's media release, the "currently low proportion of people (14%) who still believe that her SONA this year will be a truthful one" is a point of concern for the Philippines. There has been significant drop in public indecision over Arroyo's SONA and the "low proportion of believers in her SONA's truthfulness ...cannot possibly represent much political capital for her and her administration." 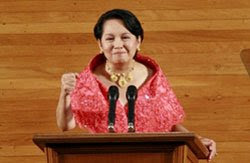 An earlier Pulse Asia survey study held in October 2007 has shown that Filipinos regard Gloria Arroyo as the Most Corrupt President in Philippine History, even beating former dictator Ferdinand Marcos for the ignominious title. Ironically, Joseph Estrada, her predecessor whom she deposed in the 2001 Edsa revolt, Joseph Estrada, is ranked number two as the Least Corrupt President in Philippine History, next to Corazon Aquino, during the post-Martial Law era.

The latest satisfaction ratings of Gloria Macapagal Arroyo is at a Philippine historical record low in two decades. Latest figures from the 2008 second quarter study of the Social Weather Station shows a negative (-) 38 net rating, even lower than the previous record low Arroyo herself has set in 2005 at the height of the "Hello Garci" wiretapped tape controversy that purportedly proved she rigged the 2004 presidential elections. Arroyo, whose assumption to the presidency has been hounded by questions of legitimacy, is the only Philippine President to post negative ratings based on various periodic surveys. Beginning October 2005, her ratings have consistently been in the negative range.

The Social Weather Survey of June 27-30, 2008 found 22% satisfied and 60% dissatisfied with the performance of President Gloria Macapagal-Arroyo, giving her a Net Satisfaction rating of –38 (% satisfied minus % dissatisfied), which is a new record-low for Presidents since 1986, surpassing the previous record of –33 in May 2005.

In all areas, majorities are dissatisfied

For the first time, gross dissatisfaction is at majority levels in all study areas: 63% in Metro Manila, 60% in the Balance of Luzon, 56% in the Visayas, and 62% in Mindanao.

The President’s net satisfaction rating in the Visayas, where she customarily draws her strongest support, fell by 18 points from –15 in March (36% satisfied, 51% dissatisfied) to a record-low –33 in June (23% satisfied, 56% dissatisfied) [Table 2, also Chart 2, Table 3].

The June 2008 survey found dissatisfaction worsening in all socio-economic classes, with the middle-to-upper classes or ABCs just as dissatisfied now as the masa or class D.

The net satisfaction rating of Pres. Arroyo fell the most among the middle-to-upper classes or ABCs. It fell by 23 points, from –14 (34% satisfied, 48% dissatisfied) last March to –37 (22% satisfied, 59% dissatisfied) in June [Chart 3, Table 4]. The previous record–low for ABCs was –34 in May 2005. It had been positive in February, June and September 2007, when the ratings for the lower D and E classes were negative or zero.

The Second Quarter of 2008 Social Weather Survey was conducted over June 27-30, 2008 using face-to-face interviews of 1,200 adults divided into random samples of 300 each in Metro Manila, the Balance of Luzon, Visayas, and Mindanao (sampling error margins of ±3% for national percentages and ±6% for area percentages). The area estimates were weighted by National Statistics Office medium-population projections for 2008 to obtain the national estimates.

The quarterly Social Weather Survey on public satisfaction with the President is a non-commissioned item, and is included on SWS's own initiative and released as a public service, with first printing rights assigned to BusinessWorld."

Pls. report broken links thru the Comments facility below: