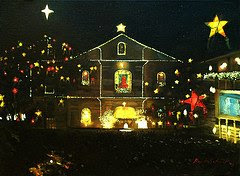 The blaring sound system speakers of a Simbang Gabi pre-dawn mass being held at a not-so-nearby church rather irreverently woke me up from my sleep a few days ago. While already an "eclectic" and simultaneously pro-evolution believer, I've been raised a Catholic such that I still hold some respect for the religion of the Pope. However, the irksomeness that an unconsummated sleep naturally brings has led me to reflect on what the Christmas and Catholic traditions have become in the Philippines. While church bells have indeed been traditionally used to announce the start of the celebration of the mass, particularly those held at Christmas dawn, is there really a need to broadcast the entire Mass service to half the town through full-blasted speakers at 4 am in the morning? Intended to beckon the faithful to take part in a merry religious tradition, it's appears to be a despairing move of the bishops to buoy up a tradition that is slowly dying under the reign of political evil the Philippine Catholic Church itself is partly responsible for. 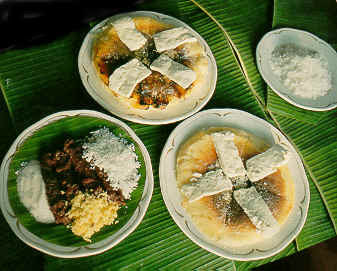 Christmas as a religious festival is said to have its longest manifestation in the Southeast Asian archipelago of the Philippine Islands. Filipino celebration of the season is also one of the merriest, combining generous Spanish-taught religiosity and festivity with American secularism to produce a celebration filled with the colors of beautiful lanterns and Christmas tree lights, richness of traditional rice cakes and Western-introduced food must-haves, spiritual enrichment the Catholic way, merriment gained from gifts and gift-buying, and the gaiety of socializing for which Filipinos are fond of. The religious highlight of the season is the Simbang Gabi, or Rooster's Mass, which is a 9-day tradition of dawn masses that starts on December 16 and ends on the 24th. 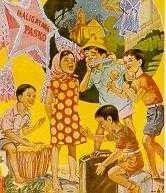 Simbang Gabi is actually a novena to the Virgin Mother that culminates with the Christmas Eve mass termed "Missa de Gallo." The tradition of pre-dawn masses traces its roots to the Spanish colonial period in Mexico when Pope Sixtus V granted the petition for outdoor Eucharistic celebration in order to accommodate the big number of faithful flocking the churches. The pealing of the church bells announced the start of the pre-dawn masses, with rural farmers and fishermen waking up early to listen to the Gospel before embarking on their way to work. 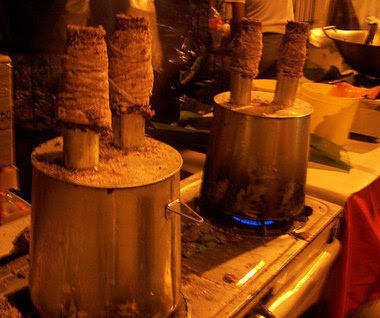 Elements of Simbang Gabi that have survived to the modern times in the Philippines are the colorful lights and lanterns or "parol" hung in every window of houses, the singing or playing of yuletide songs in both Tagalog and English, hearing of the mass by the entire, or at least most members of the, family, modest after-dawn mass feast on native delicacies like puto bumbong; the climax comes after the Christmas eve mass when the whole family gathers to celebrate Noche Buena with a generous feast of various delicious delicacies and dishes such as queso de bola, puto bumbong, bibingka, rice cakes, Chinese ham and hot chocolate or salabat.

Filipino Christmas on the Decline 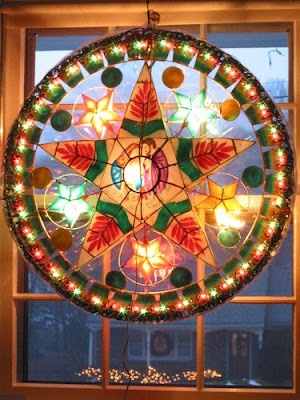 The post-millennium decade, however, has seen a markedly noticeable decline in the colors and merriment of Simbang Gabi and Christmas celebration as a whole. As recently as the 1970s and early 1980s, the start of the "ber" months (September until December) already signaled the coming Christmas season, raising gleeful anticipation among Filipinos. Come the mid-to-the-late 1990s, the Christmas spirit and its materialistic expressions seemed to have moved further down the "ber" months. Outside the often artificial buoying up of Christmas spirit in the TV and other media, the early years following the turn-of-the-millennium definitely confined Yuletide thoughts and gifts-buying among the greater majority of the people of the Philippine Islands to the Christmas month proper, December.

An analysis of nationwide yearly surveys by the Pulse Asia research institution show how majority of Filipinos have consistently harbored anticipations of a less prosperous Christmas season in recent years compared to better times. A majority of Filipinos expected the 2005 Christmas season to be poorer than the preceding year, 2004, and beginning 2006 until 2008, an overwhelming majority have expressed expectations that the season of Christmas will only be the same as the previous years in terms of prosperity. In effect, the four-year periodic studies bare how the Filipinos' annual views and feelings of Christmas prosperity have generally remained much lower than 2004 levels. Even in terms of the spiritual aspect, there have been less people hearing mass, particularly among the young people, as according to the observations made by the Catholic Bishops Conference of the Philippines (CBCP) itself during the Simbang Gabi period in 2005.

Hunger and Suffering under the Wicked Reign of Arroyo, the Illegitimate President

Materially and spiritually, the Christmas seasons in the Philippines have now been running shorter and bleaker. With less houses lit with Christmas lights and parol, shorter anticipation of and preparation for the Yuletide, and less mass attendance, it is not hard to conclude that the overall Filipino Christmas spirit is on the decline and under siege.

Material-wise, the bad state of the economy under the scandal-laden Gloria Arroyo administration has apparently been responsible for the less and less merry Christmases of Filipinos. This is hardly surprising since the highest levels of total hunger and of total poverty are all registered during Arroyo's time. The latest 2008 4th quarter Social Weather Stations or SWS survey shows the highest ever level of hunger in the country, beating the previous percentage high of 21.7 in September 2007. An estimated 23.7 % of Filipino households, or a record-high of around 4.3 million families have been suffering involuntary hunger at least once in the preceding three months. 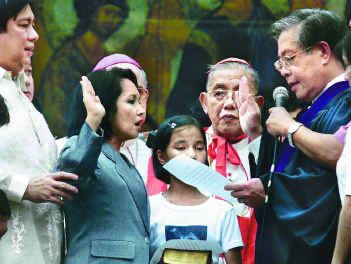 That Christmases in the Philippines have become less bright in both material and non-material terms are perhaps to be expected when the nation wallows in the darkness of an immoral leadership. Beginning from the unconstitutional ouster of President Joseph Estrada to pave the way for the installation of the power grabbing Arroyo in January 2001, the Constitution and democratic institutions of the Philippines have been mangled and corrupted, alongside the crumpling of the sacred right of suffrage of Filipino citizens. Crucial to the success of the EDSA 2 mob that deposed the hugely-popular-with-the-masses Estrada and installed bogus "President" Arroyo is the support of the Manila portion of the Catholic Church led by then Cardinal Jaime Sin.

Seemingly blinded by Arroyo's facade of Catholic religiosity, then-archbishop of the Archdiocese of Manila committed the seditious sin of going against Caesar by conspiring with then-Vice President Arroyo, former presidents Fidel Ramos and Cory Aquino, Supreme Court Justice Hilario Davide, and certain elite members of business, military, and even the media to grab the presidency using the cloak of "People Power." Cardinal Sin first exhorted Filipino Catholics, including minors from Manila Catholic schools, to rally and pressure Estrada into resigning. When it became clear that the properly President would not give up, to depose him only 2 1/2 years into his term, supposedly on corruption and moral grounds. 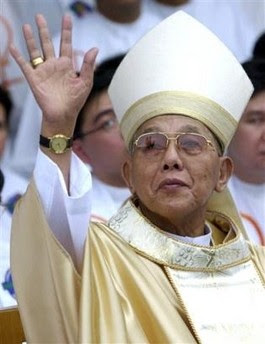 The decision by Cardinal Sin to conspire in ousting Estrada and installing then Vice-President Arroyo was illogical at best, and undivinely inspired at worst. Two months before the EDSA 2 uprising, following allegations of jueteng-related corruption against Estrada, an SWS nationwide survey showed that majority of Filipinos wanted Arroyo to support and not to criticize the President. Another SWS survey in December showed that Estrada still enjoyed a total of +9 percent satisfaction rating, in contrast to Arroyo whose public approval nosedived to -4 percent. 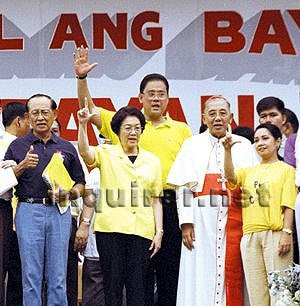 The SWS poll commissioned by ABS-CBN on January 6-9, 2001 during the Estrada impeachment trial clearly reveals how Estrada was still trusted by the people (+11 national net rating), as his perceived antagonists became distrusted. Arroyo received a dismal -34 trust ratings in the National Capital Region alone, and all-negative figures across all socio-economic classes. The public trust of the anti-Estrada former presidents Fidel Ramos and Cory Aquino also plunged to practically double-digit negatives. Most astonishingly, the level of trust towards Cardinal Sin plunged to -4 and 0 percentage points in December 2000 and January 2001, respectively. 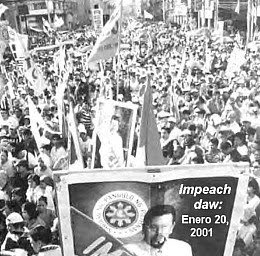 Estrada, who is viewed as the only post-Martial Law President to have ascended to the presidency with a clear mandate from the people, became a victim of a coup d etat conspiracy blessed by the powerful Catholic Church. Commenting on the developments surrounding EDSA 2 and the ouster of Estrada, Time Asia predicted with a rather uncanny wisdom of foresight how "One loser among the coup makers will be the Archbishop of Manila, Jaime Cardinal Sin, and his church." In a pro-agrarian prayer rally only this December 2008, the farmers were practically asking the bishops to "turn against" Arroyo and be solid in fighting corruption and upholding social justice. 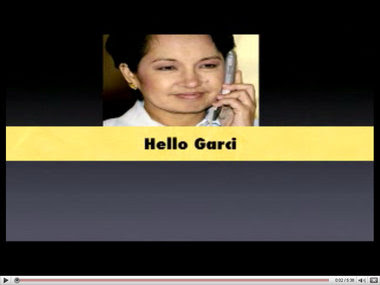 It thus appears that the disillusionment with the political bias of the bishops have caused the Church less adherents or less attendance in their Simbang Gabi and regular Eucharistic services. The real losers, of course, are the Filipino masses who now have barely enough to put on the Christmas table. Forced to contend with a traitor Vice-President who grabbed power, and who is widely regarded to have cheated in the 2004 elections and to be the "Most Corrupt President in Philippine History," the masses, especially, have borne the severe effects of the illegitimate, immoral and deceptive, self-aggrandizing, and callously unpatriotic administration of Gloria Arroyo. 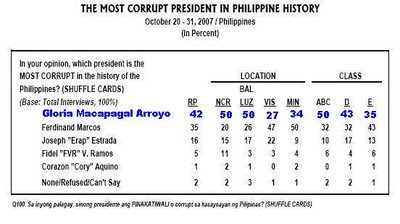 Scandals after scandals--from the IMPSA power plant deal, to the "Hello Garci?" electoral fraud, Malacanang bribery scandal, to the Bolante fertilizer scam, the "guilty" verdict on Estrada plunder case, the infamous NBN-ZTE project, and everything in between--have eroded the people's faith in government and in the Catholic Church. Even international anti-corruption and human rights watchdogs and lending institutions, such as Transparency International, Amnesty International, World Bank, Bertelsmann Foundation, Worldwide Governance Indicators, MCC and even the European Union have not failed to notice, eventually either castigating Arroyo or impeding loan/aid releases.

Bringing Back the National Christmas Spirit

Loudly blaring the external church audio speakers so the rest of the community can celebrate the Simbang Gabi Eucharist won't enliven Christmas, nor bring disillusioned Catholics back into the novena tradition because artificial just don't cut it. As much as Christmas is the season of loving and forgiving, so is it a time for celebrating and pursuing goodness and shunning evil. An essential element to goodness is to admit to a wrong, no matter how heinous and collective, so that the wrong can be undone.

Just recently, Ex-President Aquino recently publicly admitted to her wrongful part in the EDSA 2 uprising, and apologized to the deposed and defamed President Estrada in no uncategorical terms. The Filipino cardinals and bishops can do no less. Archbishop Oscar Cruz has already written about Arroyo's "consistent high rating in corruption in form of big guile and gross deceit in the management of public funds [and] a continuous low grade of approval in terms of pervasive distrust and enormous dissatisfaction." However, if the local Catholic Church is to regain its moral ascendancy in the Philippines, the CBCP would have to officially admit to their seditious role in EDSA 2 with as much consensus as they wielded in calling for Estrada's resignation and ouster back in 2000-early 2001, and in installing and continuing to support an Arroyo who never had the genuine mandate to serve as president. Next step is to help give back to the Filipinos the right to be governed by the leader they have truly elected and not just any one falsely legitimized by a conspiracy of powerful elites.

Undoing the terrible wrong that is Arroyo is righteous because it is the spiritual and social responsibility of the Church to fight the cloud of evil reigning in the land. It has erred against the people and against the Church when it conspired against a properly elected president. Only by helping ensure righteous and popular governance in the land can there be a chance of regaining the Filipino Christmas spirit that is merry in both righteousness and material grace. ____________