Is Pacman a hero of the Philippines? 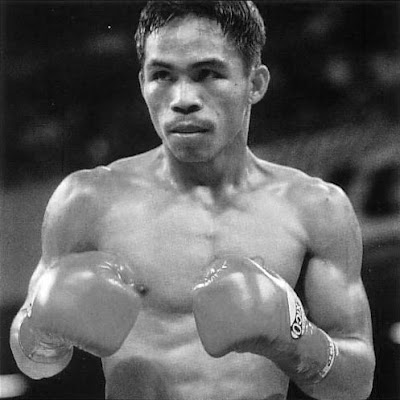 Standing at 5 feet 6.5 inches, Pacquiao hails from Bukidnon province in the southern Philippine island of Mindanao. His boxing exploits have made him not only popular and rich, but also earned him a level of admiration so great that some even of his countrymen/countrywomen regard him as a modern-day Filipino hero. During his preparation for the WBC lightweight title bout versus David Diaz, AsianWeek, "The Voice of Asian America" publication, called him a "Philippine hero [aiming] to become [the] first Asian to win titles in four weight classes." Does Pacman deserve to be honored along with the rest of the pantheon of heroes such as Andres Bonifacio, Jose Rizal, Emilio Jacinto, Apolinario Mabini, Antonio Luna and the likes? Is Pacquiao patriot material, or just an iconic boxing figure with an eye on patronage politics?

Pacquiao's matches sure draw the arena and broadcast crowd as he also rakes in millions of dollars in earnings, which grow with every bacon he clinches. A regular group to his matches are no less than scores of Philippine congressmen who fly en masse thousands of miles just to watch Pacman in action live. With the multi-million US dollar earnings of the boxing legend, a portion goes to the Filipino people. Good. Good? Nope, far from it, because what the Filipino masses lose is far greater than Pacquiao's taxes that supposedly go to government service for them. 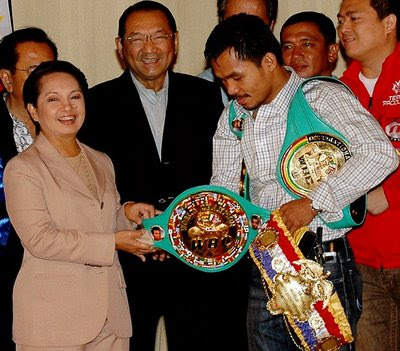 With his every bout a junket of 20, 50 or so congressmen, along with other favored officials of the Gloria Arroyo government, cross the high seas to watch Pacquiao fight in person. The Filipino thereby loses indirectly by way of absentee legislations, and directly by the millions of dollars they foot for the junket. In practically every major fight of Pacquiao under the Arroyo administration, the First Gentleman and/or scores of congressmen travel first class, stay in the best hotel suites and show up to cheer their idol and political friend Pacquiao. All at the government's expense--despite claims to contrary. In June 2008, even while Typhoon Fengshen was ravaging the southern portion of the Philippines, 59 congressmen hitched a junket during Arroyo's Obama stalking in the United States, to watch Pacman in the works live. Something similar happens today for the Pacquiao-Hatton fight. 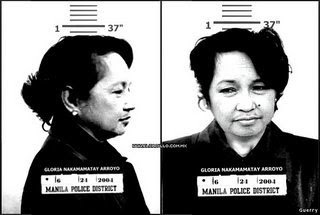 But Pacquiao is Arroyo's avid supporter willing to let his popularity by used as her desperate PR tool. The relationship between Pacquiao and the notoriously corrupt administration of Arroyo is perhaps best seen in the following editorial from The Daily Tribune:

Gloria Arroyo has been hanging onto the tails of Pacquiao's fame for all its worth in her wishful thought that some of Pacquiao's star quality that is coupled with a huge popularity among boxing fans in the country--and they are legion--would rub on to her.

So popular was he and a hero in his hometown that Gloria, desperate for her endorsed victory to prove that hers was not a kiss of death, tapped Pacquiao, who was persuaded by her to run for Congress in the 2004 elections in his home province, South Cotabato, but was soundly beaten by a tiny slip of a feisty girl, Darlene Antonino-Custodio.

Pacquiao must know about Arroyo's illegitimacy and corruption. Every soul in the Philippine Islands does (although, of course, her supporters-cum-beneficiaries of this government would not admit to it). Everyone knows about the power grab from the sitting President Joseph Estrada back in 2001, and the "Hello Garci" expose of the cheating during the 2004 presidential elections. And who does not know about her never-ending litany of corruption, the latest of which is the World Bank project rigging scandal that involves her very own husband, "First Gentleman" Mike Arroyo? The boxing great should particularly know Arroyo's brand of politics because he ran under her party as a congressional bet.

Awareness of Arroyo's evil, however, does not stop the 'modern hero' from helping in the continuing megalomaniacal rape of the Filipino people by a fake President eager and adept at turning every Manny Pacquiao victory into an opportunity to help perpetuate herself in power. At the height of the NBN ZTE broadband deal, following Pacman's triumph against Marquez for the World Boxing Council superfeatherweight title, Arroyo promptly exploited the national victory to placate the public outraged by the sheer value of alleged kickbacks involved in the anomalous deal. In a statement, Arroyo called Pacman "truly one of our nation's heroes who can unite us even in times of divisiveness. An icon of the masses, Manny Pacquiao mirrors the champ within every Filipino, here and abroad." 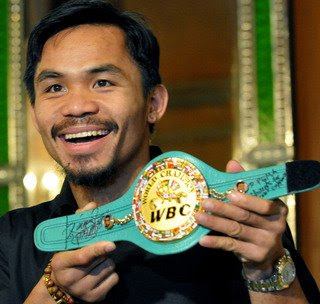 A hero. The wicked, notorious Arroyo calls her ally Pacquiao a 'hero.' But what is a hero? Merriam-Webster's Dictionary gives two applicable definitions. The first is "one that shows great courage;" and the second is one "admired [based on one's] achievements and noble qualities." Using the first definition, Pacquiao can indeed be considered a "hero," a boxing hero that is. There should be little doubt that Pacquiao has exhibited great courage in demolishing his recent boxing opponents who are all legends in the boxing world. 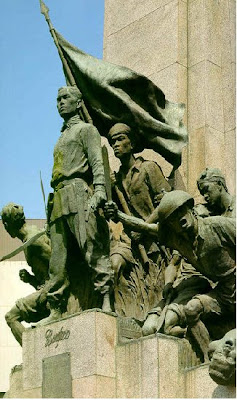 Despite his stellar victories, however, such is not enough to regard him a hero of the Filipino because he lacks genuine patriotism. He sure has brought unprecedented sporting pride to the country but that still won't turn him into a hero. When the second definition is applied, Pacman definitely won't qualify as a hero of the Philippines. He might have gained the admiration of the Filipinos and other races based on his boxing achievements; however, he fails when graded on the aspect of "noble qualities." While it is true that the famed boxer dedicates his every fight and victory to the Philippines, he remains blind to the immoral governance of the "President" he has chosen to support. Given his extreme popularity and charisma, the least Pacquiao could have done was to remain politically neutral and thus, refuse to be a political pawn of a leader consistently shown by surveys here and surveys there to be repudiated and distrusted by the people. 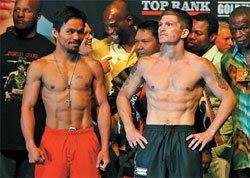 In today's boxing match, this column predicts that the "People's Champ "will triumph against Englishman Hatton--albeit only via technical given the impressive records of the two. Half the bettors will cheer, the Philippines will (mostly) celebrate, and the wicked Arroyo administration will once again ride high on Pacman's popularity. Now, is Pacquiao a hero of the nation? Let history be the best judge.