The Stupidity of the EDSA 2 "People Power" Gullibles Relived

A running broadcast advertisement is reliving the stupidity of the EDSA 2 crowd conned into deposing the constitutionally-elected Joseph Estrada and installing Gloria Arroyo as successor. The anniversary advert running in Philippine television stations shows Arroyo swearing in as "acting President" amidst the seditious sea of mob humanity who flocked the streets of EDSA. What follows is a series of 'testimonies' of ordinary individuals who claim to have experienced economic gains after the revolutionary change in government. Amidst the consistent surveys showing the worst levels of hunger, worst perceptions of corruption and worsening personal and national quality of life and--all under Arroyo’s illicit reign--the political spot comes as almost a complete joke. 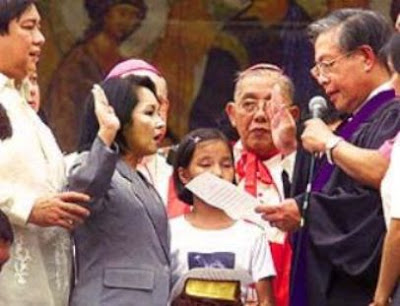 This laughable political advert is part of the "Arroyo administration's seventh anniversary celebration of the now infamous EDSA 2 putsch-cum-People Power that overthrew the popular Estrada, and which sent the Filipinos into seven years of polarization and political instability. It illustrates how Arroyo has used the power of media to seize power and even, to maintain her hold on it.

The traditional local media had largely hailed the 2001 coup as a "People Power" triumph over the supposed corruption of President Estrada. In fact, the mainstream broadcast and print Philippine media have served as an influential force in advancing the demonization and ouster of the sitting President and further, in deviously disguising before the Filipinos the constitutional anomaly that is EDSA 2.

The 'Estrada is Guilty' and 'long live EDSA 2!' propaganda campaigns participated in by most of the Philippine media actually began months prior to January 2001 during the drive to depose President Estrada. In what has been later exposed to be a well-orchestrated scheme by elitist elements that included the camp of then Vice-President Arroyo and former President Fidel Ramos, the local broadcast and print media played an instrumental role in demonizing Estrada and generating some public support for his ouster. Soon after Estrada decided to leave Malacanang to avoid any possible confrontation with his followers, the largest television stations, GMA-7 and ABS-CBN, ran for several weeks their 'victory' footages of the four-day revolution, acclaiming it as supposedly a victory for democracy in the land. 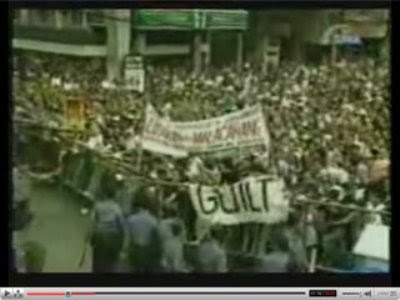 In contrast, the foreign media were in general agreement in their critical coverage of EDSA 2, describing the event as a power grab instead of as transition enabled by "People Power." Phil Bowring of the International Herald Tribune decried the impeachment walkout and the revolt, saying that "far from being a victory for democracy that is being claimed by leaders of the Anti-Estrada Movement such as Jaime Sin, the evolution of events has been a defeat for due process.” Time Magazine, in its February 19, 2001 issue, saw how “People power 2 was swift justice indeed--as in a lynching, it repudiated the very essence of due process enshrined in the constitution.”

Even foreign politicians and analysts shared the criticism of EDSA 2. Then Singapore Senior Minister Lee Kuan Yew was quoted by The Straits Times on how he viewed "the change of power in the Philippines [as being] no boost for democracy because it was done outside the constitution." Wikipedia also quotes Hong Kong-based political analyst William Overholt who referred to EDSA 2 as "mob rule or mob rule as a cover for a well-planned coup."

In contrast to what the local media wanted the Filipinos to believe, EDSA 2 was no real showcase of "People Power" but rather, the fruition of a sophisticated and complex power grab conspiracy. Part of the planning and execution of the coup-in-disguise included the exercise of subtle psychological warfare by a major general who is a veteran in this game. In the midst of the Estrada impeachment, his predecessor Fidel Ramos--himself beleaguered by corruption charges--marched on the streets of EDSA in a move that seemed to (successfully) beckon the people to protest and follow suit.

Contrary to the lying claim propagated by the Arroyo administration and EDSA 2 stalwarts though media propaganda, the unseating of Estrada did not come about because of a well-intentioned, spontaneous popular revolt. An interview conducted by renowned author Nick Joaquin and which first appeared in the Philippine Graphic revealed that a power grab from Estrada had been planned long before the impeachment and that two of the key putschists were no other than Gloria Arroyo and her husband Mike Arroyo. With or without a popular component, the overthrow of the President with the highest plurality vote in history would have pushed through.

The defection of the military's top brass was the focus of the putschists' Plan A. This priority plan was what brought in the campaign to bring people to EDSA through media propaganda and centralized invitation by cellular texting. Arroyo's camp managed to convince then Chief-of-Staff Angelo Reyes to join, but on the condition that there will be a million-strong crowd in the streets of EDSA to help convince the service commanders to join.

Arroyo and Singson's camp also had a Plan B that included having elements of the military strike the initial blow by withdrawing from the government, to be followed by other groups such as the Philippine Military Academy graduates from Class '71, Class '72, etc. Moreover, they had a bloody "back-up strike force" given the orders to shoot against every place in Metro Manila and the provinces where Estrada forces will resist. It is herein seen that the unseen hand that directed the propaganda and political machinations against Estrada had a heartless determination to grab power. For all the illusions of the EDSA 2 people, it has become apparent that they had simply served as pawn to overthrow a very popularly elected leader. Worse, the EDSA "People Power" principle of a peaceful revolutionary change in government was in no way a consideration for the elitist elements who never respected the millions of masa (lower-class) votes received by Estrada.

Concededly, though, idealistic elements were present in the civilian support of EDSA 2. No less than members of the youth and the academic community lend some dignity to the rebellious occasion. It is even safe to state that the country's premiere university, the University of the Philippines, attended in majority force. It is just so sad that for all their intelligence and patriotic aspirations, the more honorable of the EDSA 2 civilians had been, well, had. Conned by political opportunists and elitist elements who envision democracy to work according to their convenience, they prejudged Estrada as guilty without the benefit of a fair and complete trial. The seemingly possessed EDSA 2 mob then dropped half their principles and acted in a Machiavellian fashion to taunt, jeer and malign Estrada. The climax came rather swiftly as the threat of the lynching mob--foolhardily ignorant of the putschists' machinations--was conveniently used to negotiate Estrada's departure from Malacanang. Aided by the seditious "party" animal, then Supreme Court Justice Hilario Davide, and failing to smell the odor of the wicked wolf in their midst, the pathetically jubilant mob then foolishly handed the Presidency to Gloria Macapagal Arroyo in a silver but tainted platter.

Revolution towards Greater Hunger and Corruption

It is most ironic that the 'Oust Estrada' campaign rode on the wings of anti-corruption and moral recovery promises but ended up driving the country into probably unprecedented post-war levels of misery, a corruption and immorality.

2007 was particularly a year of ignominy for Arroyo on several counts. Despite her proud but dubious claims of steering the country into economic stability, a Social Weather Station survey study shows that the level of total hunger hit its highest last year--the second time in her administration. Another 2007 survey, this time by Pulse Asia, betrays how Filipinos consider themselves and their countrymen worse off now than some years back ago.

It is in the area of morality, however, that Gloria Arroyo received the worst disgrace of her political life. The October 2007 Pulse Asia nationwide survey on corruption revealed how Filipinos view her as the "Most Corrupt President in Philippine History." The survey results prove particularly embarrassing not only for Arroyo but, perhaps, also for those responsible for her unconstitutional ascent into the Presidency because she even beat Guinness-holder Ferdinand Marcos for the inglorious title. Estrada, who has faced the politically-suspect Plunder charges and seven years of consistent demonizing by the Arroyo administration and elitist camps, placed only third in the list. What had made Gloria Arroyo top the "Most Corrupt" list is nothing else but a long litany of corruption issues that began soon after the EDSA 2 "People Power" gave her the reigns of illicit power.

A number of personalities and participants of EDSA 2 have already admitted to the mistake, nay stupidity(?), of the Estrada ouster. Prominent among them is former President Corazon Aquino. While admission and penance may not necessarily bring back the constitutional order of the government, nor undo the defamation of Estrada, nor perhaps the lives of those who died by hunger or poverty-related suicide due to corruption of public funds, nor return the lost honor of the Supreme Court, it is a step in right direction. The zeal for change may sometimes override sobriety and foresight, and lead people to stupid decisions. Let EDSA 2, then, be a bitter blunder to rectify because otherwise, the nation as a whole will suffer worse.