R.I.P., Samuel Ong. Be in peace where your soul will traverse. Your noble efforts to inform your Filipino compatriots of the terrible crime and farce behind the presidency of the incumbent through your dissemination of the "Hello, Garci?" tapes will not be in vain. In time, the Cheater, Fake 'President' Gloria Macapagal Arroyo will reap her awful karma. In time, no wicked crime against the motherland will go unpunished.

The agony of choosing whether to go by the way of the heroes, or give in to the seduction of the richly rewarded traitors of the Republic, you excruciatingly went through. In the end, you chose to whistle the truth--surreptitiously at first, and when you sensed mortal danger, you publicly owned up to it. For four years you endured so much, as you hoped and waited for change. The sweet closure of justice did not come in your lifetime, but it will, it should, in time.

History will judge you a patriotic hero—that I am sure of. In behalf of the Filipinos who were unable to physically comfort you, or adequately support you during your principled crusade, I bid you a farewell laden with the heartfelt gratitude of a nation you served with conviction.

Samuel Ong a "hero of truth," says
Ex-Pres. Joseph Estrada
(Dir. Samuel Ong was the former deputy director of the National Bureau of Investigation who presented the "mother of all tapes," the master tape containing the wiretapped conversations about apparent vote rigging between President Gloria Arroyo and elections commissioner Garcillano and certain military and other officials during the 2004 presidential elections. Born October 8, 1945, Ong succumbed to lung cancer on May 22, 2009. He is said to have died minutes after having the deposed President Joseph "Erap" Estrada on his bedside. Erap referred to him as a "hero of truth)." 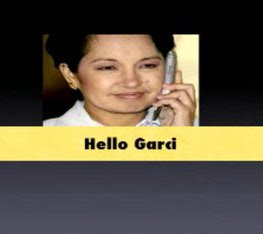 Arroyo, "Hello Garci" and the Anniversary of Her Bogus Presidency


Pls. report broken links thru the Comments facility below:
Posted by Jesusa Bernardo at Sunday, May 24, 2009

It's rather sad that he was not able to fully testify to Gloria's having stolen the elections.

You're right, AdB. I'm not sure but did he leave any taped detailed statement or something? Perhaps his public confessions/interviews would do--later when Arroyo's down and out.

"ohokay," supposedly a first-degree pamangkin of Dir. Samuel Ong posted at my Newsvine column some words of gratitude to those who appreciate the efforts of her uncle. Here are her words:

Thank you for writing this article! He was definitely a great man and he was a great uncle to me. I just hope that someone will finish what he started
#3 - Sat May 30, 2009 2:34 AM EDT

It was 5 years ago, June 10, 2005, when he was on air broadcasting the "mother of all tapes". How time flies. He wanted to see new leadership, new hope for our nation, new beginning. It's sad that he will no longer see any of those as he is now with our Creator.

His death last year was very paiful to us, but his courage and bravery in exposing the hello garci controversy would forever be the source of pride for the family.

Late as it may seem, we would like to thank everyone who uttered very nice words to my father. Thank you very much. During our times of grief, your words have comforted us. Thanks again. - L.G. Ong