Video of the unearthing of the 57 Maguindanao massacre victims
YouTube URL: http://www.youtube.com/watch?v=eSxhajWc9Ks 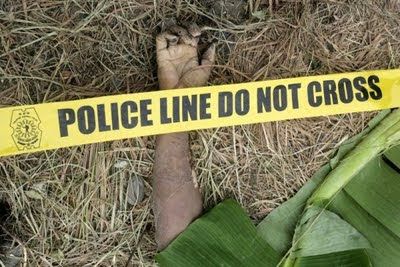 I cannot imagine the anguish and anger that the families of the nearly 60 victims of the Ampatuan (Maguindanao) massacre might be feeling right now. The prime suspects pointed out by former Senator and Ambassador Ernesto Maceda (and, actually, almost everybody else) are the Ampatuans, those figures "so bold, so powerful, so drunk with power, so murderous." The same figures associated with the huge electoral fraud against 2004 presidential bet Fernando Poe Jr. and the ridiculous 2007 12-0 "victory" of the administration's senate slate Team Unity in Maguindanao province. While I join in its condemnation, I see the case as just an effect, albeit extreme in its wantonness and multiple murderousness, of the undue influence of the hypocritical, undemocratic civil society forces—the same ones that installed and have sustained the Philippine's Illegitimate, a.k.a. "President" Gloria Arroyo. 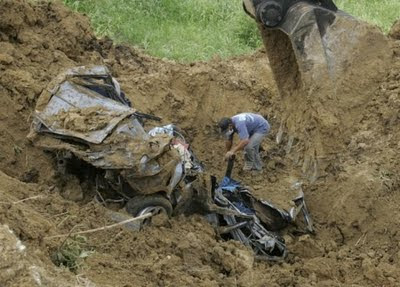 Maceda calls the kidnapping and killing of the (mostly female) Mangudadatu family members, lawyers and supporters,  media persons and others  "the height of cruelty and devilishness, so unparalleled in Philippine history," with the extreme superlatives perhaps based on earlier reports that some of the victims were beheaded and/or raped. I reckon that Muslim or no Muslim, as the case with the apparent intended targets, or Christians/otherwise as applicable to the media companions, the pain over the sudden loss of loved ones, aggravated by the arbitrariness and senselessness of the killings must be unfathomable.  The anguish must be doubly felt by the families of those who only accidentally trailed the Mangudadatus convoy, or of the media persons who were merely doing their jobs.

In trying to decipher how and why the Maguindanao massacre happened, a host of ideas and theories has been floated. Dean Jorge Bocobo of the Philippine Commentary remarks in Facebook how the Maguindanao/Mindanao culture is marked by vendetta. The government seems to propound the view that the incident is nothing but simple clan warfare. 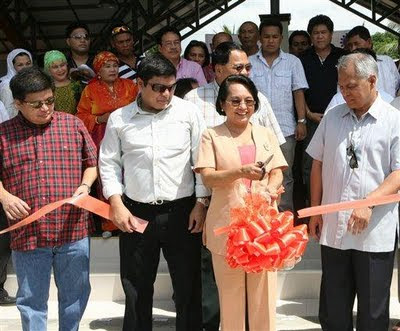 It may well be clan warfare, but how would that explain the temerity of the perpetrators to include several dozen unintended victims that include members of the powerful media, a number of whom were connected to national press? How would such a framework account for the reported involvement of the town or local regional policemen? Drug tests done on Mayor Andal Ampatuan jr. belie any theory that the murders were done under a state of temporary insanity. How would a simplistic clan vendetta framework explain the reports that the mass grave was dug up days before, designed to be wide enough to accommodate any and  all companions of the Mangudadatus?

If the Ampatuan massacre were truly only a local, clan-based exercise, the mastermind would not have dared include media people in the crime. No warlord would dare include 22 or so innocent media people in any crime/vendetta killing--unless he is confident of political support from the national government. Fact is, the Ampatuans built their power and influence because, as the Christian Science Monitor puts it, the clan "has been nurtured by the central government for almost 20 years."

The Ampatuan massacre, with all its genocidal goriness, is not the worst crime perpetrated during this illegitimate administration. The crime of the travesty of the people's electoral will, perpetuated by the civil society, notably through the 2001 "People Power" 2 coup against Estrada and the 2004 cheating of FPJ, the genuine 14th President of the Philippines, is. 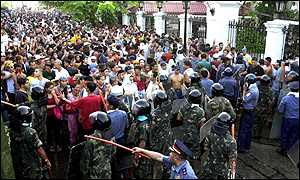 To enable and sustain their travesty of the democratic process, the uncivil civil society has been relentless in imposing its undemocratic will on the Filipinos. First, it legitimized the seditious Edsa 2, a.k.a. Oplan-Excelsis manifest, with a never-before-heard "constructive resignation" ruling without resignation letter and without any real presidential incapacity. When the People Power 3 erupted in April-May 2001 in the attempt to rectify the undemocratic ouster of Estrada, the masa participants were not only dismissed and branded "the great unwashed" but, as well, machine-gunned in historic Mendiola.

Throughout all these, the 'civil society' sank into the depths of incivility and disrespect for the Constitution. As Sen. Juan Ponce Enrile put it during his September 22, 2009 privilege speech, in describing the EDSA 2 crowd that President Erap refused to disperse:

The mainstream media, by the way, has largely been very much in the continuing conspiracy to mold the Republic not according to the will of the majority but according to theirs. Despite the sacrifice of blood let from the dispersal of Edsa 3, the media generally dismissed the urban revolution of the masses. Such media snootiness (if not heartlessness) against Erap's masa supporters is perhaps best represented by veteran journalist Rowena Carranza's article with a title that says it all: "Excuse me, Please Don't call it People Power III." Even the leftist segment of the civil society did not bother to assail the violent dispersal. It's not clear how many Edsa 3 supporters were killed but I remember Sen. Edgardo Angara lamenting on TV why no investigation was made into the deadly operation. 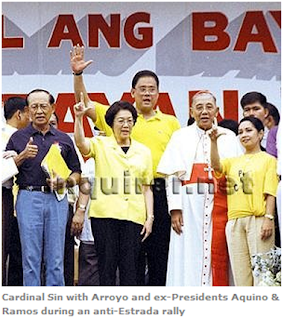 During the 2004 elections, solons including Liberal Party stalwarts Franklin Drilon, Kiko "Noted" Pangilinan, and Noynoy Aquino, either passively watched the great cover-up or actually actively blocked the opening of the contested COCs that would have revealed whether it was really Arroyo or FPJ who won in the presidential race. This, amidst charges of poll cheating reported in The Daily Tribune and elsewhere, but which the civil society did not denounce. It was only when the "Hello Garci" wiretapped tape evidence of electoral fraud was revealed by ex-NBI Deputy Director Samuel Ong and Atty. Allan Paguia--with FPJ already conveniently dead--that the civil society made some noise.

Let it not be forgotten that the Illegitimate was civil society's own making. They installed Gloria undemocratically, in wanton disrespect of the results of the 1998 elections and with absolutely no regard to the 2000 year-ender and early-January-2001 survey studies showing President Erap as still enjoying positive trust ratings while the confidence ratings of the anti-Estrada figures plummeted.

The Filipino elites, either of pockets or of prejudicial mind, may be heard denouncing Gloria every now and then but it's always in a restrained way seemingly calculated not to let pro-masa politicians regain the reins of power. No wonder that while they swiftly and unceremoniously booted Estrada out of power, they were never able to dethrone Gloria Arroyo despite her never-ending corruption scandals and Hello Garci Illegitimacy.

I am sorry to say but the Ampatuan massacre, gory and monstrous it might be, is merely symbolic of the extreme crimes that the civil society, distinguishable by its consuming prejudices against pro-masa politicians, is capable of. Actually, civil society bears some blame for the Ampatuan massacre! How come? By installing, sustaining, and failing to depose the Illegitimate and "Most Corrupt President in the Philippines, they only further empowered the Ampatuans' warlord-style lawless rule in Maguindanao.

Truth is, the Ampatuan's rise to power began with the civil society personalities associated with the administration of President Cory Aquino. Tingting Cojuangco, Noynoy Aquino's aunt, sponsored the appointment of Zacarias Candao as Maguindanao OIC. Candao later on tapped the Ampatuans to control Maguindanao and manipulate election results. Nonetheless, it was after Edsa II that the clan of Governor Andal Ampatuan Sr. reached its peak of power and influence. The Daily Tribune's Herman Tiu-Laurel writes:


"There is no question that Edsa II only strengthened the power of the Ampatuans even more. In sweeping aside the Constitution and justifying the illegal removal of an elected president, thereby legitimizing the illegitimate, Gloria and the rest of the Yellows had to resort to force, deception, and fraud to supplant the Rule of Law."

Maguindanao and the Ampatuans were critical in the “election” of Gloria Arroyo as President in 2004. As revealed by the Hello Garci wiretapped evidence of  2004 electoral fraud, Arroyo spoke with former elections commissioner Virgilio Garcillano over details of efforts to manipulate the outcome of the presidential race in her favor.  In the official vote tally, Arroyo’s lead over opposition bet Fernando Poe Jr. in seven towns controlled by the Ampatuans had the incredible average ratio of 99.83% to 0.17%; in two towns, FPJ even got a near-impossible zero vote each, with all votes going to Arroyo. 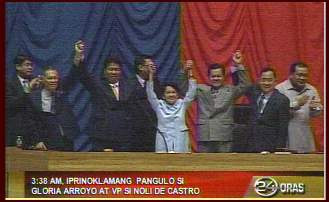 The blog Philippine Revolution ventures to write that the "younger Andal knows all the secrets of that Maguindanao Hello Garci operation."  Gloria is very beholden to the Ampatuans for their role in the 2004 electoral fraud, which led to the surreptitious break-of-dawn (actually wee 3:00am of June 24, 2004) proclamation of Arroyo by ex-Senate President Drilon, ex-Speaker de Venecia, ex-Senate majority leader Noted" Pangilinan , etc.

Out of gratitude for the Ampatuan's political support (translation: poll cheating operations for Gloria & party), the government installed via the Edsa 2 coup has promoted the warlord-style lawlessness in Maguindanao. Maceda writes that he's been informed of how Gov. Ampatuan was imprisoned in Saudi Arabia back in 2003 "because he carried $6.3 million, yes million" but after three days, Gloria Arroyo was able to work for his release by interceding with the Saudi king. Further, the elder Ampatuan "is allegedly pocketing the Internal Revenue Allotment (IRA) released for Maguindanao."

The Ampatuans are well known to be operating a private army that includes deputized paramilitary members and have controlled the province and even the Autonomous Region in Muslim Mindanao (ARMM). Gloria and the civil society have long been aware of this but they're probably been only too grateful for the fraudulent votes the Ampatuans have delivered, enough to block the Fernando Poe Jr. presidency and opposition's control of Congress. 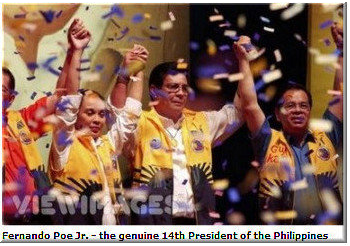 On TV, the husband of one of the intended victims, Vice-Mayor and gubernatorial candidate Ismael Mangudadatu, was appealing to "President" Gloria Arroyo for justice. It made me wonder whether he or his family took no part in legitimizing the Illegitimate Gloria via the 2004 poll fraud operations in Maguindanao.  Are the Mangudadatus not also (Muslim) members of the hypocritical 'civil society'?

The massacre of close to 60 people in the warlord's territory in Maguindanao, mostly victimizing somewhat influential individuals, is most abominable; however, it is no crime against the nation, or at least not intended to be. In contrast, the 2001 coup and the 2004 electoral fraud are direct crimes against Philippine democracy, against the people, against the masa majority of Filipinos. The mass killing in Maguindanao is but a by-product of civil society's political crimes against the Republic. The Ampatuan massacre is a gory product of the political culture of impunity bred and nurtured by the uncivil 'civil society' of the Philippines.

My name is Jasmine Ferrer, a research assistant for the study, "Filipino blogging and political participation," an independent research funded by the International Development Research Centre (IDRC) Canada through its Strengthening ICT Research Capacity in Asia (SIRCA) grant program. A component of this study aims to: (1) look into the motivation of Filipinos for reading political blogs; (2) determine if and how Filipino political blog readers participate in politics, offline or online; and (3) examine whether reading political blogs have affected the nature and level of their political participation.

We'd like to request your participation as one of the survey respondents for this study. If you're interested to participate, please provide us your email address so we can send you the survey form in Word file. Feel free to send questions/clarifications to the principal researcher, Ms. Mary Grace P. Mirandilla at mg.mirandilla@gmail.com or at mpmirandilla1@up.edu.ph. To learn more about her work, visit http://www.linkedin.com/in/gracemirandilla. Info about the SIRCA grant program can be found at http://www.sirca.org.sg/.

We look forward to hearing from you soon.

Thank you very much.