Consider the Aquino Legacy: Should Noynoy Aquino Run for President? 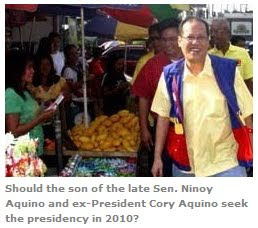 Sen. Benigno Simeon "Noynoy" Aquino III is supposedly in Davao for a spiritual retreat, trying to seek "divine guidance" as to whether he should run for president in 2010. I hope that when he emerges on Monday, he would have already communed with and, thereby, been enlightened by the spirits of his father and mother. It is my ardent hope that by the end of his retreat, he would come to the right decision and continue the path of his mortal but noble parents--allow himself to be driven purely by the vision of a truly democratic Philippines, abandon partisan and elitist politics and announce to the Filipinos that he will unify the opposition by dropping his newfound presidential ambitions. He would then ask his supporters to respect the wisdom of his decision and explain that his running will only further divide the country because the obtaining conditions were unlike those in 1985 and 1986.

He would perhaps then articulately recall the famous, stirring words of his father, the late Sen. Benigno "Ninoy" Aquino: "I am no longer seeking the presidency of this land, I am not seeking anymore any office in this country... I shall dedicate the last drop of my blood to the restoration of freedom." His retreat, I hope, will make the senator see that his martyr father was able to unite the Filipinos by entirely letting go of his personal ambitions and offering himself not as a leader who worked to covet the presidency from strongman Ferdinand Marcos but one who offered his life, or his death, to achieve our unity.

It is true, of course, that Noynoy's mother, former President Corazon "Cory" Cojuangco Aquino, ran for the top elective post in 1986 and in a way, therefore, materialized in her person the old presidential ambitions of Ninoy. However, as practically everyone recognizes so, Cory was a reluctant presidential bet who only agreed to run in the bid to unite the opposition. The unity process went like this: following President Marcos' call for snap elections "in answer to [the opposition's] request," one million signatures petitioning for Cory's candidacy were presented her; the opposition then slowly united behind Ninoy's widow; while it took some time, her husband's friend and top presidential contender of the mainstream opposition, former Sen. Salvador "Doy" Laurel of the UNIDO party was eventually convinced to slide down as Cory's vice-presidential running mate amidst public clamor to ensure an opposition victory. 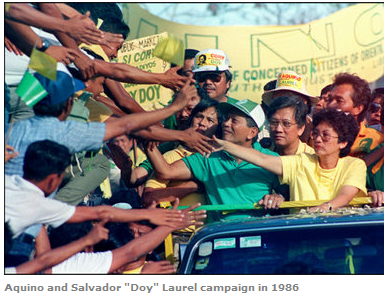 If Noynoy were any bit serious in truly carrying out the patriotic mission of his parents in ensuring that democracy lives on, he'll see that the present conditions do not warrant his bid for the presidency, at least not yet in 2010. For one, the incumbent "President" Gloria Arroyo is constitutionally barred from running for the presidency. This means that unless charter change efforts by the administration succeed, there really is no strongman or strongwoman that the opposition will face. Secondly, there appears to be no replication of the 1 M signatures happening (which today should really be around 1.8 or 2M to compensate for the country's population increase).

Thirdly, and perhaps most importantly, there are so many presidential wannabe's from the opposition and they are generally not inclined to give way to him. Just about those who have signified the intention to shelve their own presidential ambitions for any "unity" bet are his own partymates or ex-partymates: Mar Roxas, who probably has been under pressure from ex. Sen. Jovito Salonga, and Sen. Francis Pangilinan, who is only eyeing the VP slot anyhow. Gov. Panlilio has reportedly already gave way but all other top opposition contenders based on survey showings are not: Villar, Escudero, Legarda and even ex-President Joseph Estrada.

Should Noynoy Listen to Lacson and Pangilinan?

Noynoy should also question the "moral quality" of the politicians urging him to run if he really wants to be rightly guided in his decision. Sen. Panfilo Lacson is also throwing his support behind Noynoy and has even urged Estrada to do the same but the thing is that he's not even a presidential contender. Moreover, Lacson is known not only for abandoning his Jose Pidal expose but worse, also has the track record of splitting the opposition back in 2004. Had he agreed to play second fiddle to Fernando Poe Jr., Arroyo would have been long out of Malacanang and the governance problems of this country not allowed to balloon to debacle levels. 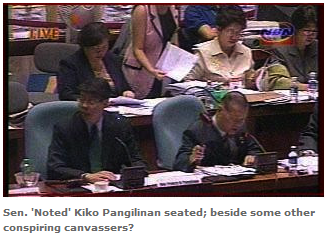 Pangilinan is another figure Noynoy should not easily heed and, instead, question for his political morality. In throwing support for Sen. Aquino, the husband of mega-actress Sharon Cuneta claimed in an interview that the only reason he wanted to run for VP was because he hoped to introduce an alternative government program. What moral right does Pangilinan have to claim he stands for reform and tell the Filipinos to support Noynoy when he is a suspect insofar as disrespect of the constitution and the people's vote is concerned. Who could really forget his role as Sen. "Noted" during the canvassing of votes for the disputed 2004 elections? Being the chairman of the Joint Congressional Canvassing body, he certainly played a notable role in the failure of Congress to open the contested provincial COCs and provide the Philippines the real victor in the presidential elections, a year before the "Hello Garci" wiretapping expose. Perhaps, his "Noted" role even gives every genuine believer in the workings of democracy the right to suspect him as one of Arroyo's minions in Congress who were tasked to delay “the senatorial canvassing until after the voting on the rules“, as revealed by the 11:25, 26 May 2004 recording in the ‘Hello Garci’ tapes.

Gov. Panlilio, on the other, does speak from a moral high ground and Noynoy can perhaps listen to him. However, it is also a fact that the governor priest is considered a minor presidential contender with negligible base of support.

If the conditions that paved the way for Cory's presidential bid in 1986 were to form the basis of Sen. Aquino's decision for 2010, the unijo hijo of Ninoy should find no reason to jump into the coming presidential race. The best possible but rather remote scenario that those pushing him to run can hope for are that the three factors be replicated today in a sort of reversed order--Noynoy announces his bid, the 1 or 2 million signatures are presented to him, and all the presidential wannabe's from the opposition support him. If that happens, that would be called baiting for it; otherwise, Noynoy will only further split the opposition.

Beware What the People Really Want

Misreading of what the general public--not just a limited strata of the entire population--wants could only work against the interest and genuine advancement of the nation, and could even alienate and trample on the will of the masses. I remember that following the EDSA 2 disguised coup, I started avoiding broadcast commemorative features or documentaries of the 1986 EDSA as well as tarmac scenes of Ninoy's assassination. In fact, I even went as far as dismissing those historic scenes as events come to naught due to the EDSA 2's sacrilege of the genuine spirit of "People Power" and the destruction of the very Constitution the original EDSA brought forth. Her own mother seemed to share my cerebral processing of the pretender "People Power,” as proved no less by Cory's December 2008 apology to Erap over being "guilty to the 2001 uprising" (Amidst news na nagkasagutan sila, the spokeswoman 'clarified' that the apology was said in "jest" but later stressed that the former President is "not taking it back.") 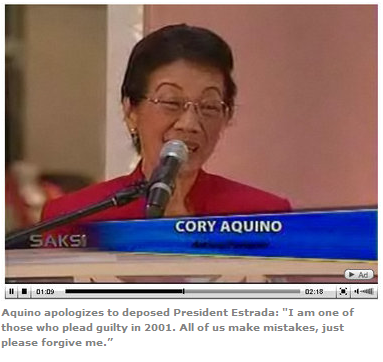 Unless "Tita Cory" herself, before she died, was able to give even just a hint that he should seek the presidency in 2010 in order to "unite the opposition" or forge a stronger front against the totally wicked governance of the EDSA 2 "President" whose para-constitutional installation they both were themselves were party to, then Noynoy better just go the way of his noble parents. In 1992, following her task of restoring the institutions of democracy, Cory did the way of her hero husband and refused the temptation of taking another shot at the presidency. She remained vigilant in guarding the newfound democracy, figuring in the anti-Cha-Cha rallies during Ramos' time. The late former President made the "mistake" of calling for Erap's ouster in 2001, but before her death, managed to make peace with the masses of EDSA 3. This helped renew what she had long lost, the "Cory magic," to resurface in the show of ardent support and militancy during her funeral. 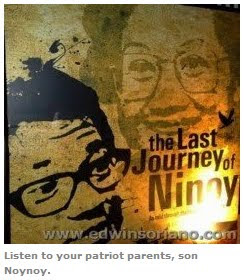 Ninoy, the patriarch of this seeming family of patriots, showed his great love for the country by turning his back on elite politics, his Liberal Party, and his presidential ambitions. If Sen. Noynoy truly wants to offer his life to serve the Philippines, it would be wise for him to follow the examples of his parents while being his own man: rise above partisan politics and forget that he is an LP, listen less to the civil society's views of what democracy and government should be, and listen more to the politically marginalized masses. If he can do that, he'll know whether to run or not in 2010.

Arroyo, "Hello Garci" and the Anniversary of Her Bogus Presidency. 30 June 2008. http://forthephilippines.blogspot.com/2008/06/arroyo-hello-garci-and-anniversary-of.html

Hey, landed on your blog, nice stuff. I found a cool new tool for our blogs... www.itsolusenz.com It helps get latest news for our keywords directly on to our blog. I added it on mine. Worked like a charm.

Where is the free tool there?